Lithium: Polluting “white gold” to save the planet?

Lithium (Li) is a chemical element belonging to alkali metals. With a density of 0.53 g/cm³, it is the lightest metal in the solid-state at room temperature. It has the highest electrochemical potential of all metals and excellent electrical and thermal conductivity. Due to its high reactivity, it does not occur as a native metal, occurring as chloride in seawater and brine, and also in the form of inert mineral compounds such as silicates or phosphates. 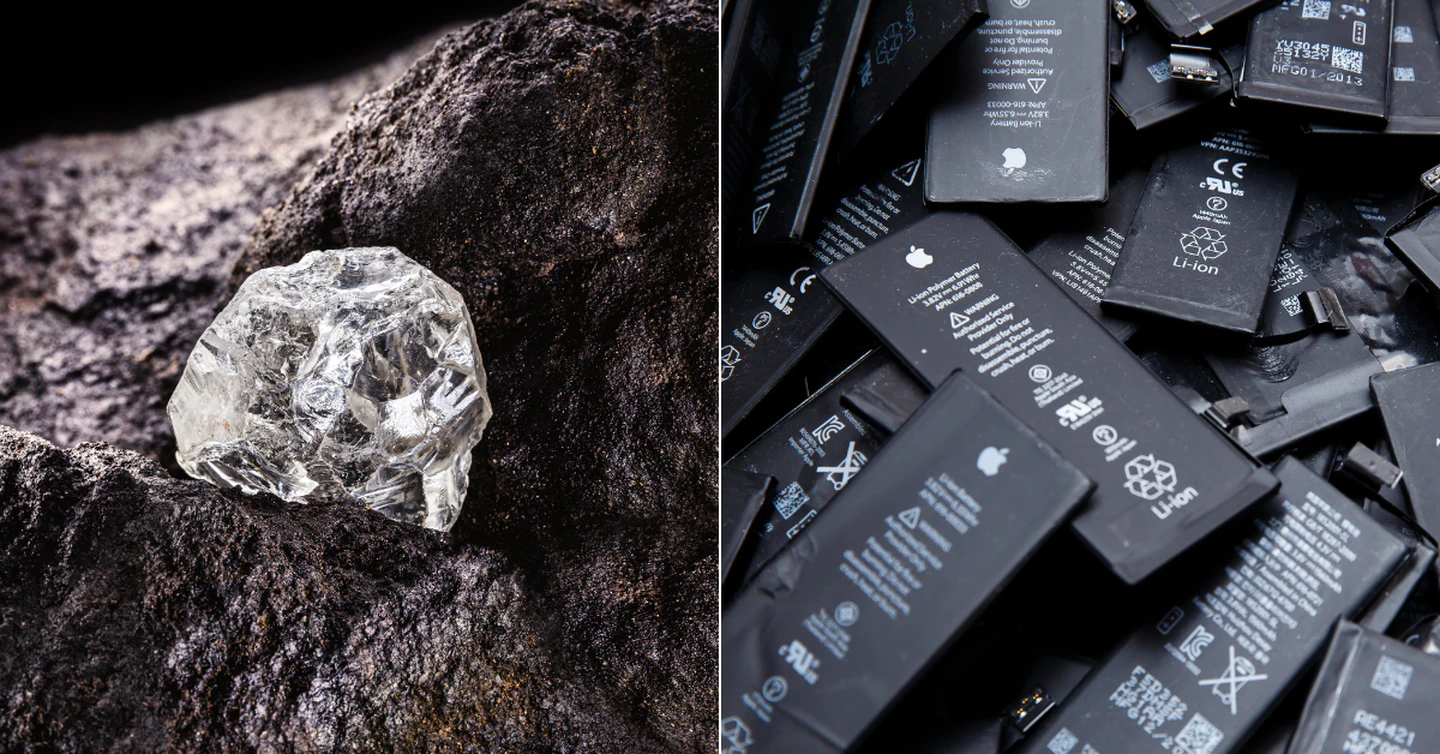 The physicochemical properties of Li make it difficult to substitute for other elements and are essential for the development of numerous industrial applications. Lithium concentrates are used in the glass and ceramics industry and the continuous casting of steel. Lithium metal is used in metallurgy and the manufacture of aluminum alloys. Lithium carbonate is used to treat bipolar disorder, depression, and other pathologies. Lithium hydroxide is an essential component in manufacturing lubricants and is also used to purify the air, removing CO₂ from the environment. Both lithium carbonate and lithium hydroxide are increasingly used to manufacture rechargeable batteries for electric vehicles and portable electronic equipment.

Due to the rise of these technologies, lithium plays a prominent role in shifting the planet towards a future of low or zero greenhouse gas emissions.

As the number of hybrids and electric vehicles increases, the growth of the lithium market will be driven. Demand growth predictions are spectacular, with rates of 20% per year.

According to the United States Geological Survey (USGS), about 80 million tons of reserves are identified worldwide through 2019. That is almost 30% more than the previous year. However, many countries with the largest known reserves have yet to commercialize this resource.

Two-thirds of the world’s lithium is found in the South American Lithium Triangle (Argentina, Chile, and Bolivia) and Australia. Work is underway to find new reserves or to improve technology to bring some difficult-to-treat deposits, such as those in Nevada (USA), into production. For example, in the Atacama Desert, with significant extensions of land, there are reserves for 50 years treating Chilean brines.

Most of the lithium is obtained from open-pit mines or saltwater containing lithium under the brines. In the latter case, the saltwater is pumped to large basins where it evaporates in the sun. The environmental effects of these processes can be significant. Open-pit mining and the salt mine method can lead to potential pollution and high water consumption, especially in areas already suffering from drought and desertification. But, on the other hand, they take up a large amount of space.

Investors are concerned about the regulatory frameworks planned by the Triangle countries with possible changes in their legislation. For example, in Bolivia, a new mining law was enacted in 2014 that was amended in 2018 in Argentina. Some representatives have called for intervention in the sector to create a national mining company. The new authorities in Chile could impose new tariffs and demand higher environmental requirements from mining. 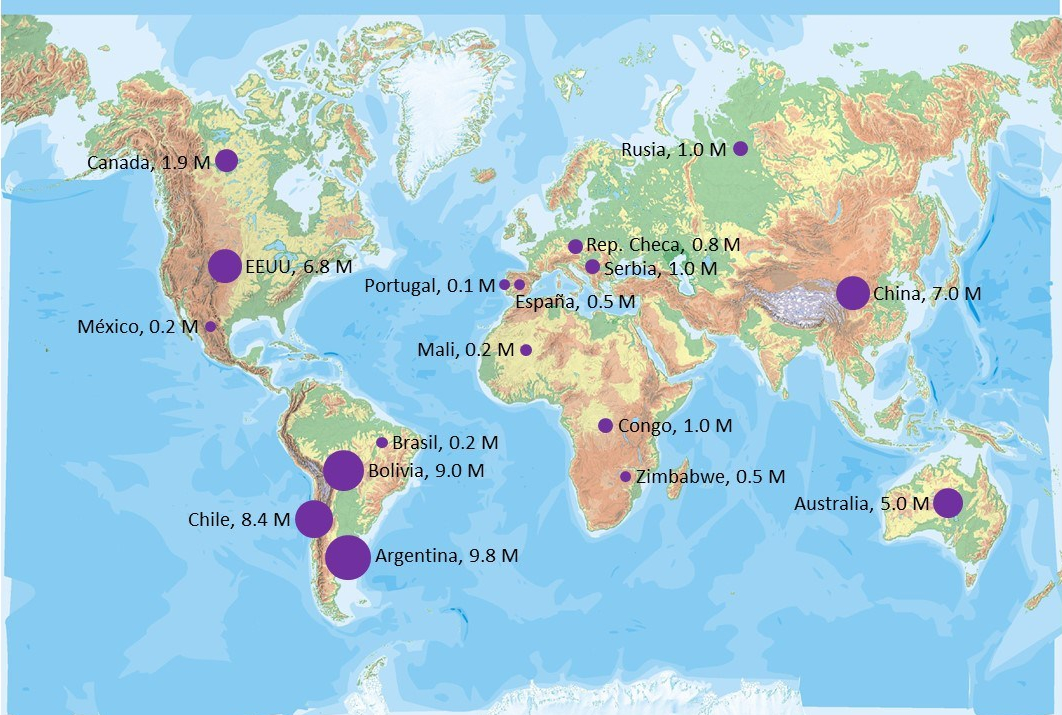 Australia is the largest producer and exporter of lithium concentrates extracted from “hard rock” silicates.

In the European Union, dependence on imports of lithium concentrates is close to 87 %, since only Portugal has stable lithium production. In addition, the EU is dependent on imports of processed compounds because none of its countries carries out refining processes. The EU recycles lithium-ion batteries, although this is not considered economically viable.

The risk of lack of supply due to the absolute dependence on very few countries that control production has led the EU to know its deposits to define strategies. These studies have established declared resources in the EU of 9 million tons of lithium oxide. This quantity has been calculated taking into account 27 potential deposits in EU countries such as Portugal, Spain, Czech Republic, France, Germany, Austria, and Finland; these are added Ukraine and Serbia outside the EU.

All companies in the sector are expanding their lithium capacity. In addition to being a significant producer of Li, China is the leading importer of this metal, both in concentrate and processed form dominates the production of refined lithium and most of the manufacture of lithium-ion batteries worldwide. Chinese companies have made millionaire purchases in the last years to supply enough projects for their national industry, so they have monopolized most of the available metal, increasing the prices of its different products such as lithium hydroxide or lithium carbonate.

The major drawback of lithium batteries is that they are composed (of cobalt and lithium) are scarce and expensive. As the demand for electric vehicles and stationary electricity storage facilities increases, these materials will become more challenging to obtain and will drive up their price. 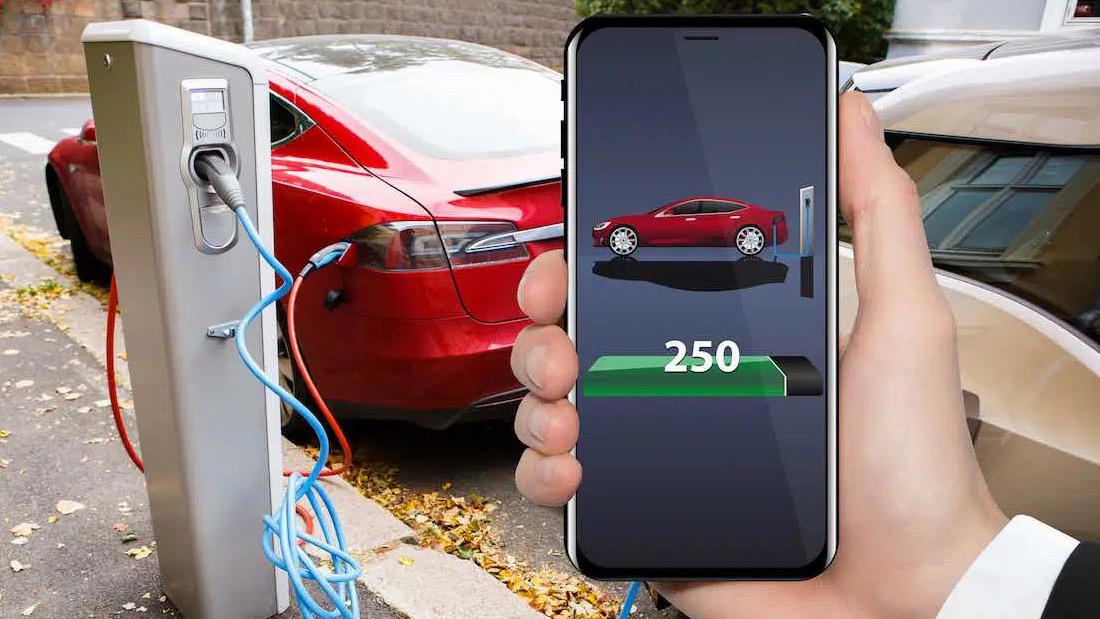 A research team at Washington State University (WSU) has created a sodium-ion battery that, in practice, is capable of matching the performance of lithium-ion batteries. The results are the most promising to date for a battery using this technology. This battery has solved the two drawbacks that this technology suffers from energy capacity and rechargeability in the laboratory. It has stored as much energy as lithium-ion batteries and maintains more than 80% of its capacity after 1,000 charge and discharge cycles.

Sodium-ion batteries could soon be an economical and viable alternative to lithium-ion batteries. Sodium is a material sourced from the oceans or the earth’s crust and is therefore cheap, abundant, and sustainable, making it a great candidate for large-scale energy storage.

Unfortunately, they do not have as much energy as lithium batteries and give degradation problems when charging and discharging. The key drawback for some of the most promising cathode materials is that a layer of inactive sodium crystals builds upon the cathode surface, stopping the flow of sodium ions and consequently destroying the battery. 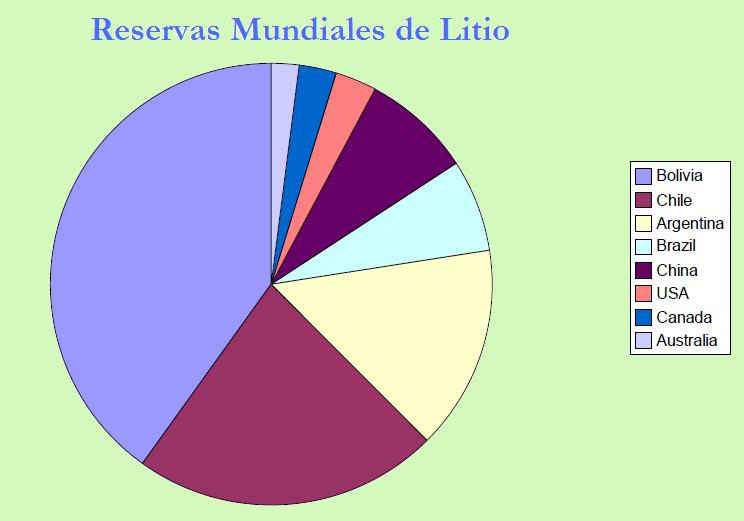 As part of the research work, a layered metal oxide cathode and a liquid electrolyte including additional sodium ions were created, creating a saline medium that enhances interaction with the cathode. The design supports the continuous movement of the sodium ions, preventing static crystal buildup on the surface and enabling successive electricity generation. Research is continuing to understand better the interaction between the new electrolyte and the cathode, so those different materials can be used to improve the battery design. The aim is also to achieve a battery that completely dispenses with cobalt, a material that is also scarce and expensive to obtain.

Lithium deposits in Spain are located in Galicia, Extremadura, and Castilla-Leon. Since 2011 there has been no active exploitation for the extraction of lithium. The last production was from the Feli Mine (La Fregeneda-Salamanca). Instead, it was a feldspar and lepidolite deposit.

Although there are no active mines for the extraction of Li, exploration projects are being carried out for this metal, with estimates of resources and reserves. However, some of these projects present the production of refined Li hydroxide as a novelty, which is currently totally dependent on external resources. 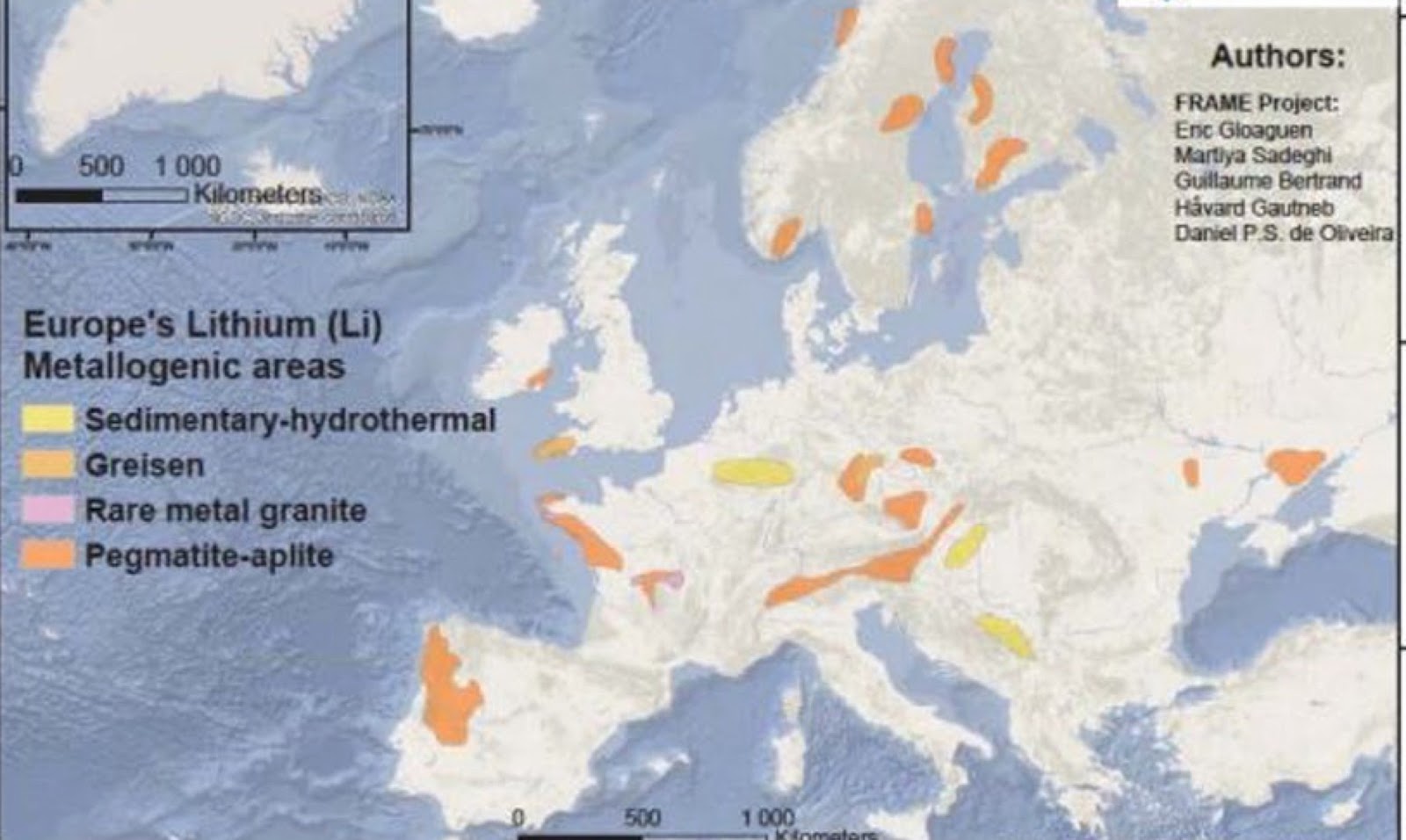 If these mining resources were used, together with the electric car and battery factories already in operation, the entire value chain of electric mobility could be established in Spain. Furthermore, the European Commission has highlighted the strategic relevance that these lithium mining projects could have for the development of the automotive industry.

However, part of society, motivated by its sensitivity towards the environment, rejects mining projects, preventing this activity from being developed in the immediate environment. It is necessary to point out that EU countries have very restrictive legislation on mineral exploitation. It is not possible to start up a mine if it does not guarantee the territory’s economic, social, cultural, and environmental order. 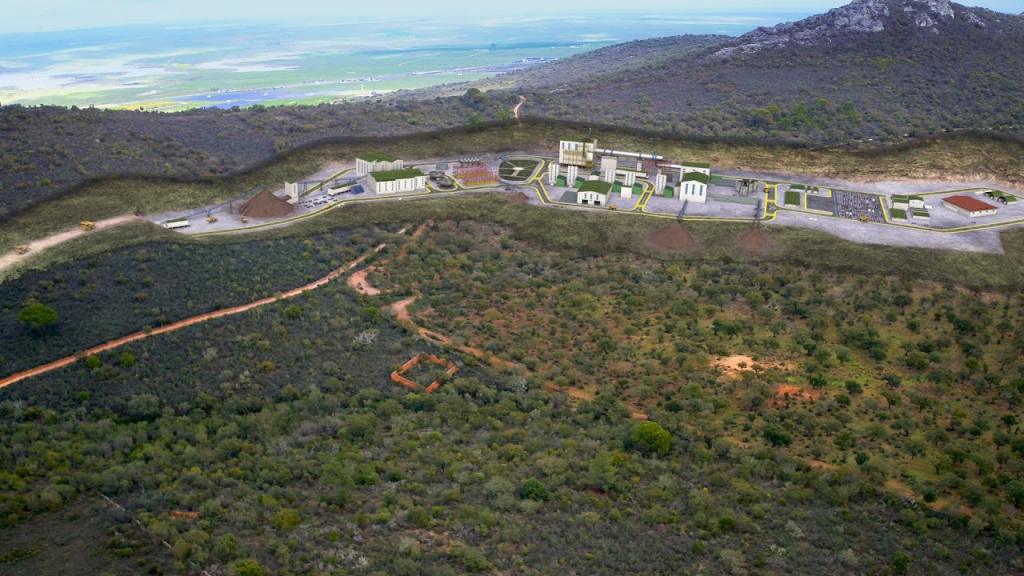 Although recycling and reuse must play a fundamental role in the future, to meet current demand, the contribution of mining is necessary. Society must decide whether to exploit resources responsibly and reduce the sector’s heavy dependence on imports or leave the deposits unused and continue to buy the raw materials needed for the ecological transition from other producing countries at a price set by international markets.