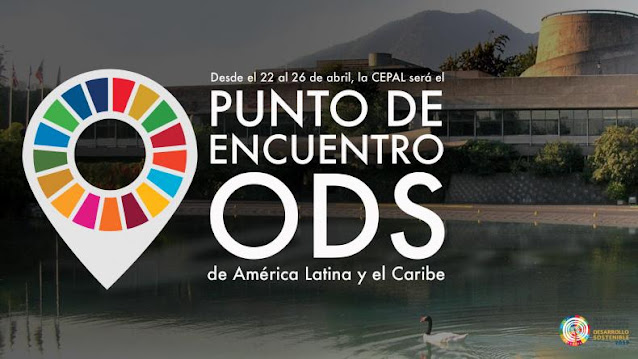 The 2030 Agenda: Agora of Encounter

I did not know very well whether to title this blog entry as I have done or rather with something like: "The 2030 Agenda: Agora of encounter to build a post-COVID-19 world". Although the idea I would like to express is this second one, it is too long for a title. The two weeks of the High-Level Political Forum (HLPF) on Sustainable Development features meetings and Side Events where representatives of nations and NGOs come together to offer ways to implement the 2030 Agenda. Well, today, July 12, we had the opportunity to attend an official side event in which two associations of religious entities wanted to discuss their achievements and projects based on the 2030 Agenda. One of them was REDES, a Spanish organization of development entities, mainly religious congregations. The other was jCor, an organization of religious congregations at the United Nations in New York.

It was a "side event" organized by what we call "faith-based" NGOs (FBOs), which are numerous, both in the United Nations and in Spain. As important as the meeting between jCor and REDES was the fact that the three main speakers were from different fields: Miguel Ángel Moratinos, High Representative for the Alliance of Civilizations (UNAOC), of the UN; Andrés Rodríguez Amayuelas, until a few months ago, president of the Coordinator of Development Cooperation Organizations, of Spain; Alessandra Smerilli, Undersecretary of the Dicastery for Integral Human Development, of the Vatican. The 2030 Agenda has managed to do what it was approved for in 2015 by the General Assembly of the United Nations: to offer an agora and a shared horizon for organizations from the same background to get to work to make a better world. In this case, they have been: Miguel Ángel, from high politics; Andrés, from the world of NGOs and Alessandra, from a dicastery of the Roman Curia. What have these three exceptional speakers told us? 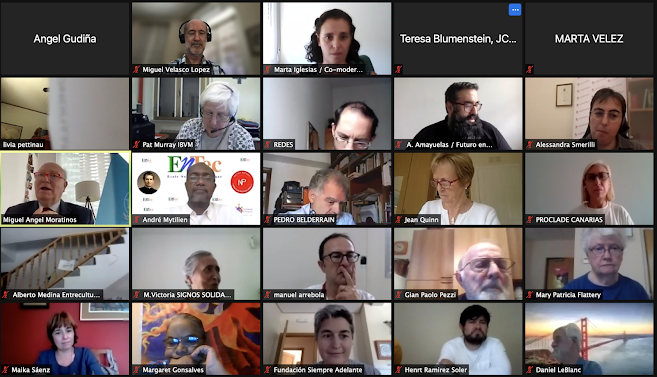 Miguel Ángel Moratinos began by stressing the importance of the collaboration of Faith-Based Organizations (FBOs) and religions as partners of the United Nations System. He insisted on something that is at the foundation of the 2030 Agenda and that we are in danger of forgetting: the 17 SDGs are interrelated, in such a way that they offer a joint panorama of where the world has to go; we cannot choose some SDGs and leave others. He also wanted to leave us with other relevant points for reflection:

*The 2030 Agenda does not speak only of the Planet and the environment; it is an Agenda for Sustainable Development that places human beings, cultures, and civilizations at the center of everything, in a planetary context.

*The 2030 Agenda has 17 objectives and 169 worthy goals which offer a common horizon, but it lacks moral references which should be provided, among others, by religions and, in particular, by the FBOs at the UN.

* COVID-19 is not only a health crisis, but a crisis that is revealing the terrible contradictions and paradoxes of our world; COVID-19 has provoked a human crisis; to find a positive solution, we must put the human being at the center of all our efforts.

* Pope Francis received unanimous congratulations when "Laudato Si" was published, but the same has not happened with "Fratelli Tutti"; the reason could be that this second encyclical points out the failures of humanity, that for which humanity functions poorly, is unjust and discards what does not serve it. Therefore, all of us, including ecclesial institutions, should disseminate and reflect more on the "Fratelli Tutti" contents.

Alessandra Smerelli spoke to us about a pandemic that is not only a health problem but a human problem; about how the most vulnerable are the ones who are suffering the most from its consequences. She then referred to the importance that Pope Francis has given to collaboration among all and to concrete commitments to find a way out of the crisis caused by COVID. Finally, he spoke briefly about the 7 Laudato Si Goals, which the Dicastery for Integral Human Development has presented in parallel and in coordination with the SDG2030. 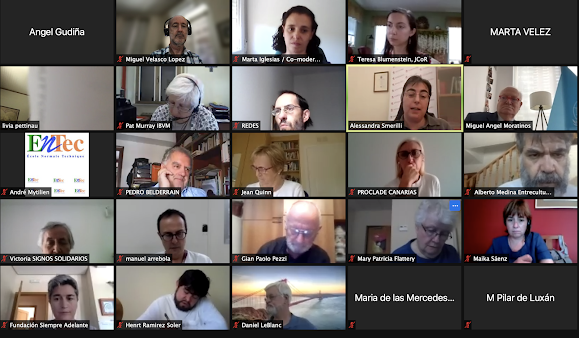 Andrés Amayuelas began by talking about the excellent experience he has always had with faith-based NGOs, both as president of the Coordinating Body of Development Cooperation Organization and before. He has always experienced FBOs as engines of social change at the local, national and international levels. For Andres it is clear that the world economic system does not work in favor of humanity. To present this idea, he brought to the reflection different quotes from Pope Francis. It is a financial system that leaves too many victims along the way; a system that also generates indifference and anesthesia to the pain of others; an economic system of "discarding." We need, he said, a new spirituality that truly "re-unites" (re-unites) people with one another; we need a new spirituality that helps us to rebuild bridges, heal wounds and build horizons for the future. Throughout history, religions have been factors of dialogue and transformation and must continue to be so. 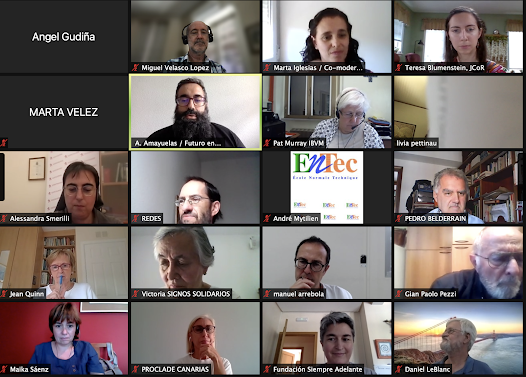 The meeting ended with the presentation of experiences of good practices based on the 2030 Agenda. Practices of concrete and committed work "on the ground," close to the concrete people, as religious congregations and FBOs (Faith-Based Organizations), do. As the Apostles say in the book of Acts, "this is what we can offer" to the rest of the religions, NGOs, United Nations, and Governments to carry forward the 2030 Agenda; always hand in hand with "Laudato Si" and Fratelli Tutti."