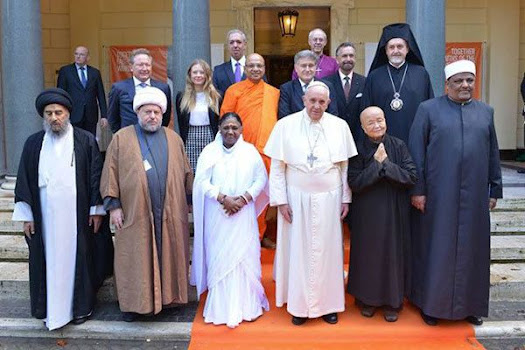 Builders of peace and reconciliation

The twentieth and twenty-first centuries will see the unfolding of interreligious dialogue activity by creating entities that will facilitate it through countless meetings. The choice of religions for collaboration and dialogue among themselves and the commitment to collaborate in making the world more humane will become increasingly apparent.

1893 is the year of the birth of the World's Parliament of Religion in Chicago as part of the Columbian Exposition. One of the most relevant participants was Swami Vivekananda, with his inclusive interpretation of Hinduism. This Parliament of Religion was the first step but, perhaps, too much dominated by a Western world overly proud of its colonial rule. Nevertheless, this open vision of Hinduism inspired Mahatma Gandhi's vision for his conception of interreligious dialogue in India, an image that members of his religion did not share.

The consequences of World War II were disastrous in all fields. On the other hand, the tragedy of the Jews at the hands of the Nazis, the loss of the colonies, and the collapse of Europe encouraged reflection on the role of Christianity in the world and facilitated the opening of Christian denominations to dialogue with other religions. Concerning Catholic Christianity, Vatican II signified a solid return to the ecclesiology of the beginning of the Church. In particular, about interreligious dialogue, the publication of "Nostra Aetate" signified the beginning of dialogue and the definitive disappearance of the statement "Extra ecclesia nulla salus" (outside the Church, there is no salvation).

The World Council of Churches created in 1971 a new department: Dialogue with People of Living Faiths and Ideologies. In 1985, Reverend Moon's International Religious Foundation gathered more than 1000 attendees at the Assembly of the World's Religions in New Jersey. In 1988, The Formation of the Council for a Parliament of the World's Religions (Chicago). In 1993 the "World's Parliament of Religions" met again in Chicago (8000 delegates). Among the meetings and agreements of the Chicago event, it is worth mentioning the agreement called "Towards a Global Ethic: An Initial Declaration"; in the final document, we can find this sentence based on the influential thought of H. Küng: "there is an irrevocable, unconditional norm for all areas of life, for families and communities, for races, nations, and religions. There already exist ancient guidelines for human behavior that are found in the teachings of the world's religions and which are the condition for sustainable world order." And, also, they convened four guidelines that were the basis for future development: 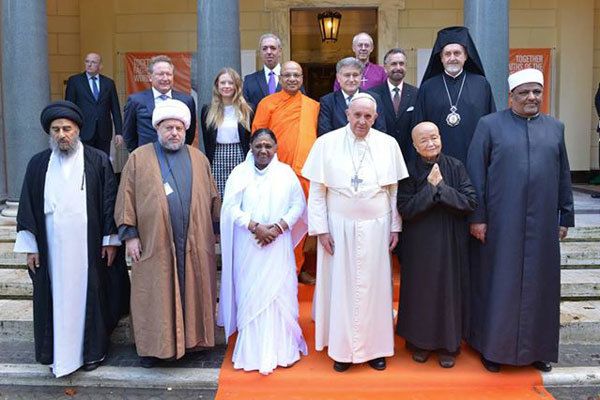 "Commitment to a culture of non-violence and respect for life.

Commitment to a culture of solidarity and a just economic order.

Commitment to a culture of tolerance and a life of truthfulness.

Commitment to a culture of equal rights and partnership between men and women".

In 1970 "Religions for Peace" was founded; its objectives are similar to those of the PWR, but it focuses, above all, on the construction and care of peace. It aims to show respect for the differences between different religions but also to emphasize the common belonging to humanity. At its eighth assembly, held in Kyoto in 2006, it addressed the theme "Shared Security," in which "all sectors of every society acknowledge common vulnerabilities and assume a collective responsibility to address them."

In 2000, the United Religions Initiative (URI) was founded to promote and deepen cooperation for "Ending religiously motivated violence." This organization is made up of more than 65 countries and more than 100 religions and spiritualities.

The journey continues; it does not stop. In August 2000, one of the best Secretaries General the UN has ever had decided to convene the Millennium Peace Summit of World Religious and Spiritual Leaders in New York City. The raison d'être of this event was to bring together religious leaders to seek ways to cooperate with the aims of the United Nations. It was the beginning of a fruitful path of collaboration that has been embodied, most notably, in the elaboration of the 2030 Agenda and its implementation. It seems that we are moving from theoretical approaches to collaboration between religions and the UN to work increasingly in complementarity and assistance.

For religions caring for the harmony of the world and living "The Golden Rule" is essential. We want to move from this "second-level" to even more central issues for religions. The search for the foundational truth of everything is always on the common horizon of all religions; we must move towards a dialogue that allows us to learn the best from each religion. We must dialogue, learn, enrich ourselves with the spiritual and mystical experiences that bring us closer to a richer and more profound experience of God. Taking up some of the ideas mentioned above, symbols, narratives, celebrations, and common prayers will undoubtedly lead us along this path.

4. The place of religions in peacebuilding.

The primary objective that led to the creation of the United Nations Organization was the maintenance of peace, or rather avoiding conflicts such as those the world experienced in the two world wars. Can religions collaborate in this fundamental task of the UN? Over the decades, the organization founded in 1945 has developed an intuitive principle in reconstructing Europe destroyed after World War II. Refugee treaties, childcare organizations, the development of agencies focused on health or famine have grown enormously to build a complex UN System that seeks to address these and other needs. There are thus two complementary ways of understanding peace: the absence of armed conflict and the construction of a more egalitarian, humane, and fraternal world.

Regarding the second aspect of the raison d'être of the United Nations, I think that the thematic and committed development of the meetings and congresses promoted by the various associations of interreligious dialogue make this clear. The themes of these meetings are justice, peace, ecology, freedom, democracy, non-violence, solidarity, tolerance, equal rights between men and women. Beyond the structural issues of our world, the 2030 Agenda and the Universal Declaration of Human Rights place the human being at the center of everything. Even the UDHR, by recognizing the right to freedom of religion, worship, and expression of faith, acknowledges that the religious experience, or experience of faith, is something inherent to the human being. It is the religious traditions that must seek the means for the human being to have a personal experience of God. There is no divergence between the approach of the UN and that of the Religious Dialogue movement; on the contrary, there is a necessary complementarity. Religions have contributed, contribute, and must contribute even more to that Peace, which implies not only the absence of war but also a more fraternal and harmonious world.

The processes carried out in Europe can help us understand how important it is to take care of all aspects in dialogue groups with people of different religious backgrounds. To build a multicultural society in true peace and justice, sincere, open, and careful dialogue is necessary; once again, religious ties offer an excellent environment for these encounters. "Helpful support could particularly include proactively creating environments in which positive interactions can begin and develop, while providing consistent support for activists, recognizing the diﬃculties inherent in their role. This also includes providing opportunities to share experiences, helping them to be well trained and network with each other." (Andrew Orton).

But what about the place of religious traditions in armed conflicts? There is a profound interrelationship between the identity of a people or culture with religion, with faith in the God who seeks harmony among all. Amid social conflicts, during peace processes between groups or cultures, putting the faith of each of the contenders can be a powerful means to heal wounds and achieve peace. Nothing has such a powerful force as faith to accomplish that the contenders, often brothers in fratricidal struggle, can be reconciled again. We could almost say that only religions that lived with the authenticity of their founders can achieve the forgiveness necessary to build a peaceful society.

Peace dialogues-processes, during armed conflicts, based on the principles and values of believers must be extremely careful. There is a diversity of groups of believers within each of the religions, some of them with such fanaticism as to indicate their infidelity to the roots of their religion. The people who carry out the negotiation must be open to dialogue with those who are different; they must be aware that, very possibly, they will have to talk to and convince of the convenience of peace to people who are on the other side as well as on their side. Peace dialogues based on religion allow understanding more deeply and broadly those who were previously considered contenders; this makes possible the existence of armistices and peace that builds a positive future.

All this framework of agreements involving treaties, ideas, limits, and, above all, breaking prejudices, forgetting affronts, and reconciliation requires the symbol. Nothing better than the symbolization of peace between opposing brothers than religious symbols accepted by those who have been contenders. This whole process of dialogue requires that the entire society in conflict be "affected" by the process of rapprochement. Agreements between the significant figures would be of little use if the people in all their diversity were not involved.

"Making use of religious and spiritual resources such as sacred texts, rituals, stories, myths, and values can be extremely beneﬁcial in helping religious actors to address ethnoreligious conﬂicts. Here, it is important to re-emphasize that inter-religious dialogue is not an alternative to other conﬂict resolution and peacebuilding efforts, such as ofﬁcial negotiations, mediation with the involvement of third parties, or secular conﬂict resolution tools such as problem-solving workshops." 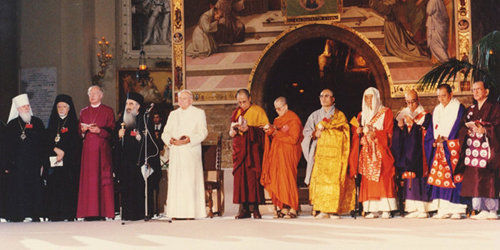 5. Religions and the UN: calls for joint work.

In the other sense, peace as the absence of war, we have seen how faith, lived from the very roots of the founders of each religion, can be a powerful instrument that brings out the best in every human being. In most cases, the wounds caused by armed conflicts are terrible, and only life-generating forces such as religions can make forgiveness, reconciliation, and the construction of a stable peace possible.

Only one thing remains to be said in conclusion. We are in a profoundly interconnected world in which everything is becoming global. This world needs testimonies of fraternity given by the great actors of our world. Often international organizations and states are not up to the task. Many times people have lost hope in the institutions and their documents. Religions must feel a strong call from God to give witness to unity to give real hope to a world that often loses it. Our ultimate strength is in God. 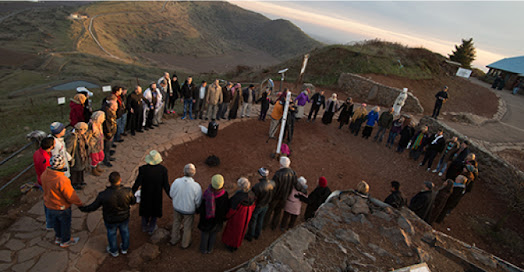