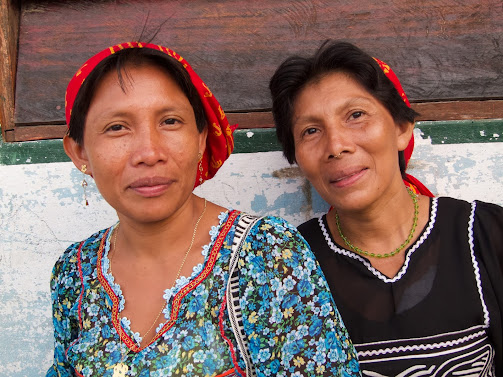 We asked Fr. Felix de Lama cmf, who has lived for 46 years with the native Guna people, to share with us his experience and learning in relation to the culture and women of the Guna people, who are among the poor and the different. Felix cmf brings us the other word, spoken and expressed from the wisdom, culture, and cosmovision of an original community that takes care of Creation from a respectful relationship, which is revealed as the Word of God, a treasure of the Kingdom:

"I am asked to speak something about the women of the indigenous peoples. It is true that there is a history of dispossession, exploitation, exclusion, extermination, struggle, and resistance that unites them, and that must not be forgotten. But we cannot ignore the particularity and diversity of each people, and the right to define themselves on the basis of their own identity. The original peoples in their plurality constitute a wealth of cultures.

For this reason, I am going to limit myself to talking about the Guna people. And something that stands out in the Guna culture is the duality that runs through everything. "Abirgunagwuaranmarnoniggi", "we come in pairs". A duality already presents in the very reality of God: Baba Dummad (Great Father), Nana Dummad (Great Mother). Baba and Nana are always mentioned together: Baba did, Nana did; Baba felt, Nana, felt...

A duality present in all life. The Guna family has two houses, one for sleeping and one for cooking. If they give you mangoes, they will always be even, 2, 4, 6...

On the other hand, the Guna family is a matrilocal family. The groom goes to the bride's house. For this reason, traditionally, it was preferred to have daughters, because they would bring male labor to the house. In addition, inheritance is through the woman's line. It is the woman who inherits the farms and land. Therefore, if a man is rejected by his wife, he returns to his parents' house with only his hammock and his clothes.

Moreover, it is only women who have ritual feasts at different times of life. Men do not have any.

The division of labor was marked by the place of work. The men's place was the fields and the sea, the women's place was the community. Thus, from the moment the man arrives from the bush or from fishing and moors the cayuco, he is in the hands of the woman, who disposes of the food and products at her discretion. 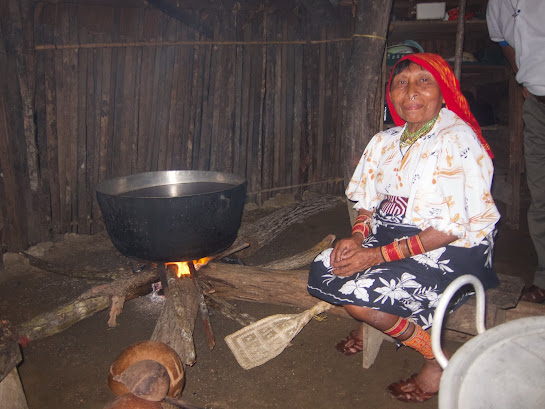 There is no doubt that women have a prominent place in Guna society, from the perspective of their worldview. But in reality, it has not always been so simple.

When, in the first decades of the 20th century, schooling for girls was very slow. And when it was necessary to travel to another community or to the city to continue secondary education, it was much more difficult for girls to do so. This whole process resulted in a clear imbalance in the role of women in society. Nevertheless, already in the first decades, there were a good number of girls who graduated as teachers.

However, it should be noted that despite the certain passivity of Guna women at the socio-political level, they are beginning to excel economically. Thanks to tourism and handicrafts, from the 1970s onwards, Guna women began to earn an income that men did not have. And it was the woman who took responsibility for the purchase of school supplies, medicines, paraffin, etc.

In the 1980s, the Catholic mission organized a series of meetings with the Guna wise men to initiate an intercultural and interreligious dialogue. Many of these meetings were attended by women. In these meetings, the elders sang and interpreted the great stories of the great grandmothers and mothers in the history of the Guna people and reread them from the current reality of the people and women. The women's discovery of these great grandmothers, builders of culture, fighters, and defenders of the territory and the community, opened their eyes and their conscience without limits. Hearing from the elders, for example, the words that grandmother Nagegiryai addressed to the male Nergans could only be tremendously motivating: "Olonagegiryai said to the great Nelegans who corrupted the village by living with several women:

- Nelegan, you have deviated from the straight path that the people demand of their leaders. You are taking several women as wives and making the weak and the sick who come to you to receive Baba's message, Nana's message, suffer. I am a woman, and are you more than me and more than all, to dominate and have as many women as you want? Are we women less than you? And how can you beat me to lead the people? You, the authorities of this community, are setting a bad example to those who want to follow Bab'Igala. You have gone astray, and you can no longer speak of Baba to the people: your words are tainted.

This led to an organizational process in which women took on a more active and participatory role in the life of the Guna people. We cannot fail to mention the project in the 1990s to install a naval base in the heart of the territory. If the project failed, it was due to the firm resistance of the Guna women's organization".

Father Felix gives us some testimonies from women of this beloved native people: 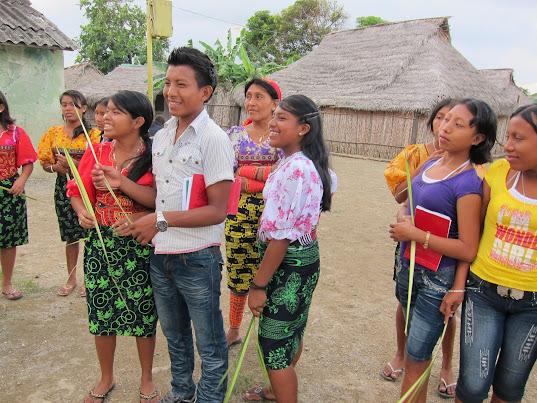 Briseida Iglesias, advisor and member of the education committee of the General Congress of Guna Culture:

"I think that since Guna life and culture in the time of our grandmothers, the Guna woman as mother, wife, the companion has always been present in the evolution of our history. Our history is full of courageous women who have helped to develop and maintain our culture. They mark the march of the Guna people. Now, as time goes by, if I go back to when I was a child when I grew up with my grandmothers, I saw how women were mistreated in the home, not physically, but verbally. Because they imposed in the home everything that women had to do. And if the food wasn't ready, my grandfather would get angry. That's when I felt the woman was a slave, submissive, timid. With time I have seen that this is changing. And I see women fighting to have a voice and a vote within each community. The role of women is important. I say that women are privileged in society, that's why grandparents celebrated puberty. At one point we were left without a voice or a vote. But the struggle of women has been very hard. And I remember the women's struggle against the imposition of the naval base.

Now we do have an active voice and participation in our traditional congresses. We have made progress in this, but there is still a long way to go. For example, the 6 chiefs are men. When they go on tour, they go alone, and where are the women? 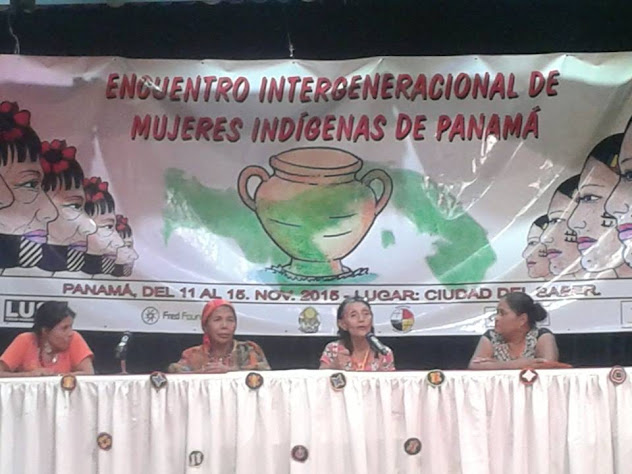 "Guna women, since history, have been a fundamental pillar in the history of the people. But, at the time, women have been more passive. They have mainly participated in the social activities of each community. But, in the 1990s, women felt the challenge of being more active and able to make their contributions. Guna women began to become more visible and to be listened to. During this time, women came to occupy the administrative leadership in several communities, and they began to participate in the Guna General Congress and the General Congress of Guna Culture in greater numbers and more actively, putting forward their position on the different points under discussion. Today, the active presence of women at a personal and organizational level is more noticeable. There is still the challenge to continue to occupy more spaces of participation.

These achievements made by women are not only women's achievements, but an achievement for the people, seen from the collective, from the unity of the people, because as we are told in our history, the Guna woman is complementarity, she is a pillar, an arm of the Guna people". 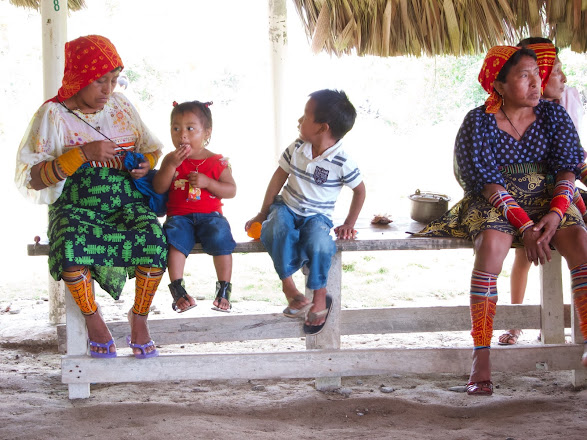 We can say that, in these last decades, Guna women have become visible in the General Congresses and in those of Culture, a visible presence, not of the company, but of contribution because of the value that they have. Because without them, Guna culture dies. Likewise, in the local assemblies of their own communities, and commissions in decision-making on the problems of each community. For this reason, they are chosen as official delegates to represent their villages in the General Congresses.

What gave impetus to this whole movement of participation was the creation of the Guna women's organisation "Olowaili" at the county level, also involving Guna women living in the slums of the cities of Panama, Colon and other associations.

The beginning of this women's organisation is a consequence of the general meetings and, above all, the women's meetings, accompanied by the Gunayala missionary team and the General Congress of Guna Culture. We can say that these were great moments of criticism, self-criticism, analysis of our own history, of our experience, our identity, our own struggle, starting from our reality as it was lived, through rites, myths, melodies, songs, dances, art, and how we live today. From an original people living immersed in this global system.

We can point out as achievements: women as authorities in their own villages, calling themselves "sailas", the increase of women in the General Congresses, the highest authority of the Guna people, the presence of women in governmental positions, such as in the mayor's office, as governor; in the national assembly, as deputy.

But we still have a lot to do, work with children, with youth, in bilingual and intercultural education. Making our spirituality known, and strengthening our mother tongue. Knowledge of our own history in all fields, art, song, dance, symbolic languages. Love for Mother Earth, solidarity with the natural ecosystem.

We thank these valuable women from the Guna community who have shared their testimonies and struggles with us. In their particularity and originality, they share with the women of the world their dedication and struggles for the care of life and the transmission of a culture of good living. They also fight for the recognition of their dignity and their participation as leaders in their People and Culture, a testimony of life and faith.

Thanks to Fr. Felix Lama for his testimony of life accompanying the life and struggles of this native people. 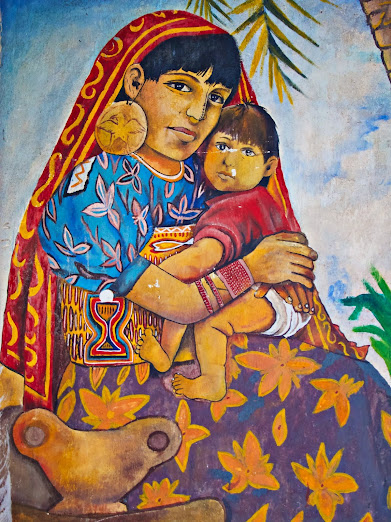