Mary and the Promotion of Peace and Reconciliation SDG 16 EN 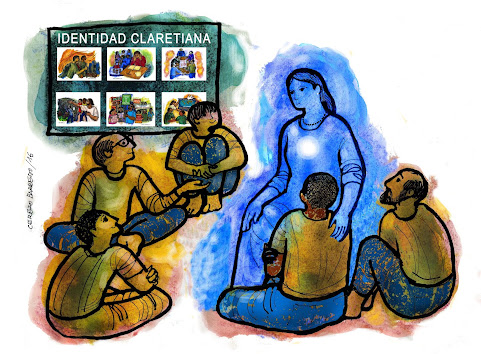 Mary and the Promotion of Peace and Reconciliation SDG 16

We Claretians, as sons and daughters of the Heart of Mary, are called to involve ourselves in the processes of peace and reconciliation. Thus, as these first two lines sound, they seem like the statement of a philosophical or theological thesis, followed by the demonstration of the statement, as was the style in the past.

Let the reader not be frightened. We will not resort to a typically deductive method, as Marian reflection of the past tended to do. We rely on New Testament accounts and proceed in three simple steps: the history of Mary's presence in the early community (Acts 1:14); the Johannine account of the presence of Mary and the beloved disciple on Calvary (Jn 19:25-27); the words of Simeon to Mary in the scene of the presentation of the Lord in the temple (Lk 2:35).

The information in Acts 1:12-13 says that, after the Ascension of the Lord, the disciples return to Jerusalem and go up to the floor where they were staying. Then comes the list of the eleven, and after it is added: "They all continued with one accord in prayer with certain women, with Mary the mother of Jesus, and with his brothers" (1:14). We know that Luke softens the contrast presented by Mark (Mk 3:31-35) between the natural family of Jesus and the new family or Kingdom family gathered around him.  Jesus had made it clear that it is his mother, brothers, and sisters who hear the word of God and do it (Mk 1:35). The picture that Luke draws at the beginning of this second panel of his "diptych" (let us call it that, for Luke is considered a painter) shows the prayerful unanimity of the two families. The Lord's Passover has brought together in a single community two groups marked by difference and mutual distance. Beyond a strict exegesis, in Mary, as she is presented in the third evangelist, we can consider the perfect union of the two bonds with Jesus: the bond of blood (she is his mother) and that of discipleship. Mary emerges in the third Gospel as a model of discipleship.

The account in Jn 19:25-27 highlights three figures: Jesus, the mother of Jesus (whose name is not given), and the beloved disciple. And in a solemn moment, Jesus sees both figures and says a few words. First, he addresses Mary: "Behold your son"; then he says to the disciple: "Behold your mother." The narrator adds that from that hour the disciple received her into his home (or: among his most precious gifts).

Those who understand the Gospels and early Christianity's history will tell us what differences, convergences, and essential points of contact exist between the Johannine community and the other Christian communities. The one and the other have their distinctive features. Thus, some might insist on referring to Jesus the title of son of David or Davidic Messiah, with more earthly implications (as the messianic group of James would think); on the other hand, the community of the beloved disciple will emphasize that the Kingdom of Jesus is not of this world (cf. Jn 18:36). But they all agree in confessing Jesus as Lord and Son of God. 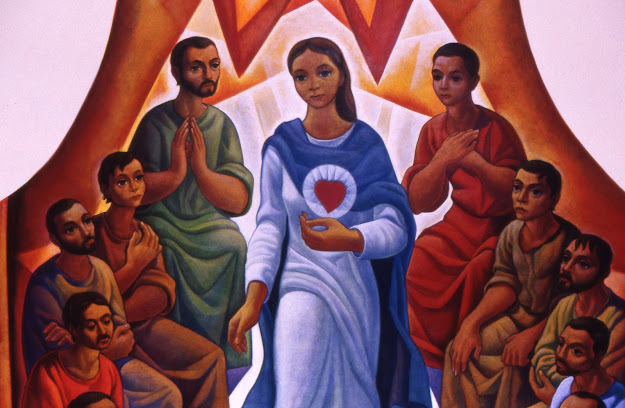 There are other notes in common: Simon Peter's figure is not only recognized in the Synoptics. His unique role is also accepted in John's community: in his first meeting with Jesus, the Master announces to him that he will be called Peter; it will be this disciple who will pronounce the "confession of Capernaum" on behalf of the group: "Lord, to whom shall we go? You have the words of eternal life. We believe and know that you are the holy one of God" (Jn 6:68-69). And Peter will be entrusted by the risen Lord with the care of his flock (Jn 21:15-19).

Not only Peter. Mary is also welcomed in the various communities. In particular, the Johannine community, represented in Jn 19:25-27 by the beloved disciple, the witness, and guarantor of its specific Christian tradition, claims a special bond with Mary. Mary, being in the group of the beloved disciple, "is at home" among her own.

These convergences of the various Christian communities point to the fact that there may well be ethnic, historical, cultural, religious differences between different groups, regions, and countries; but the points of contact and shared elements can be emphasized. 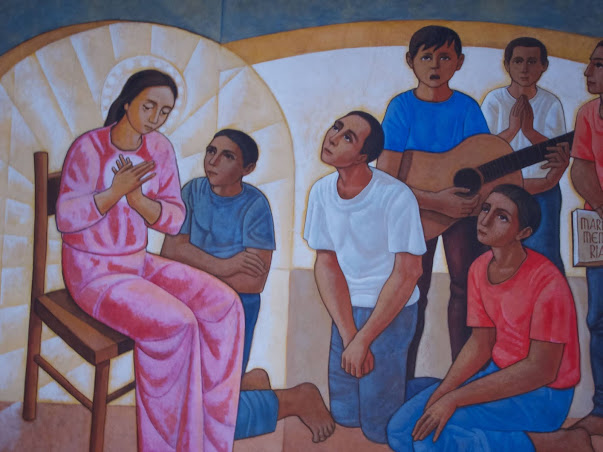 And now we come to Simeon's words to Mary about the sword that will pierce her heart (Lk 2,35). Different interpretations of this prophecy are given: the pain produced in her by the rejection to which Jesus is subjected, a rejection that goes to the extreme of violent death on the cross; the difficult and painful discernment that the word of God provokes in Mary's mind and sensibility, as Jesus' reactions in Mk 3:31-35; Lk 11:28; Jn 2:4 would indicate. But an author, Charles Perrot, who has also inspired some previous notes, offers a new explanation; it can be accepted by way of hypothesis. The transfixion of Mary would have been due to the disagreements and rifts between, on the one hand, the Jews who recognize the Messiah and those who reject him (cf. Lk 4,29), with the consequences of death and persecution narrated in Acts; on the other hand, between the different ecclesial groups: perhaps in reaction to possible "dynastic" pretensions of the relatives of Jesus; or because of questions such as the sharing of the table between Jewish Christians and those from the Nations (permitted and forbidden foods); or because of the clash, if Mary knew it, between Paul and the false brothers who preached circumcision; or because of the discrepancy between Paul and "those of James" (Gal 2,3-4. 12). She will have opened her heart to welcome the new believers, thus passing from belonging to Israel of the first covenant to belonging to definitive Israel or the definitive people of God.

The missionaries can learn from the welcome given to Mary by the various communities, without anyone wanting to appropriate it for themselves; they can contemplate her in a painful process in which the Word urges her to widen her horizon of life and to enter into another dynamic which leads her to welcome those who were previously strangers; they can feel her affected by the conflicts that break out in the different areas where they carry out the mission; they can, finally, ask the Queen of Peace to intercede so that the conflicts that cause so much suffering may be overcome, and the violence that causes so much death and so much pain may disappear, and to help them in their work of mediation. Clashes are the cry of every day. May the tasks of understanding and peacemaking be the daily endeavor, and may the joy of peace be the daily gift and reward.