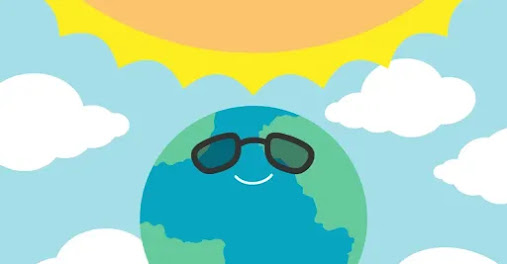 (or Climate Change in space and time). Part I

It happens in the new version of The War of the Worlds (2005). Our world is under attack by a more technologically advanced alien species. Our weapons don't make a dent in their ships. We are desperate. In a scene set in a top-secret US military laboratory (of course!) where they are holding a captured alien, the boy in the film makes telepathic contact with the alien and discovers the terrible reality: they are like space leeches. They travel the galaxy, jumping from inhabited world to inhabited world. When they reach one, they invade, exploit, and plunder until there is nothing usable left, and then they jump to the next world to do the same.

They must be stopped! - exclaims the "protagonist" - Our world, our race and our way of life are at stake!

Actually, this planet does not have to wait for anyone from the outside. It has the enemy at home. Homo Sapiens" (sapiens?) is enough on its own to make H.G. Wells' 1898 novel "The War of the Worlds", which inspired Orson Welles' famous radio program of 1939, and the two films of the same title (1953 and 2005), come true. 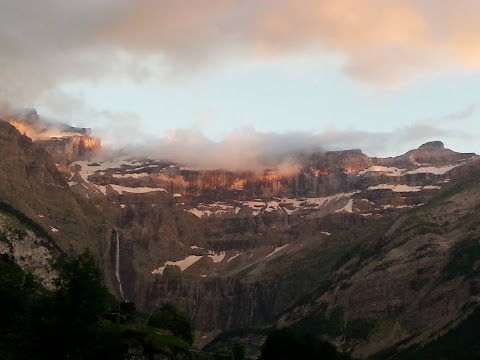 Climate change is the greatest threat humanity has ever faced, not only to the environment but also to our own future as a species (does anyone see the analogy?).

Argentina has suffered this year's harshest winter in living memory. But, taken as a whole, 2016 and 2019 have been the warmest years on record (since 1880).

In the last 13 years, the record for the smallest frozen area in the Arctic has been broken 13 times, and in the five-year period, 2015-19 sea levels have risen at a rate of 5 mm/year.

The Pyrenees have lost 80% of their glacier mass in the last 30 years. The cold drops once typical and restricted to the Levant have recently given way to nationwide DANAs.

The Philippines has experienced several typhoons this year, one of them with gusts of up to 350 km/h, the strongest ever recorded on the planet; they could have kept a Jumbo jet in flight with its engines stopped!

The Caribbean has suffered 31 hurricanes this year, of which the most recent, Eta and Iota, have been the most catastrophic, the latter reaching the highest grade 5. Flooding has persisted for several weeks in the area, severely compromising the fragile local economy. On both continents, many families have lost everything.

The average global temperature today is 1.1°C higher than in pre-industrial times - only 1.1°C! and we can already see the devastating consequences. The Paris agreement aims to contain the rise in temperature to 2ºC, but it is estimated that at the current rate by the end of the century the rise could be 3-4.8ºC!...

Global warming, or climate change, is already here, and its consequences will get worse and worse if we don't do something about it. And soon.

The theory is simple: man has based his economic development on burning fossil fuels, which is releasing huge amounts of CO2 and other greenhouse gases into the atmosphere. 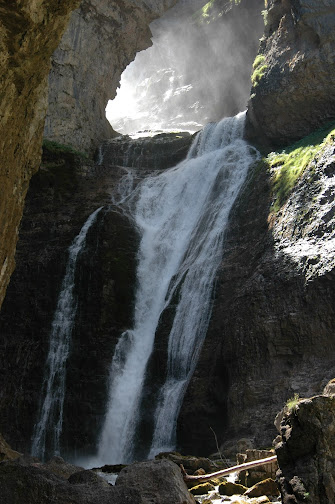 The Earth constantly receives enormous amounts of energy radiated by the Sun, of which it reflects a part. This is called albedo. However, the energy received is at certain frequencies and the energy reflected at others.

Greenhouse gases are so because they are more opaque to the frequencies of the energy reflected by the Earth than to the energy received from the Sun. The incoming energy is thus trapped in the earth. The more CO2 increases in the atmosphere, the less energy is reflected and, therefore, the more it is absorbed and the more the Earth and its atmosphere heat up, which by accumulating part of this energy is capable of generating more intense phenomena: harsher winters, hotter summers, more intense evaporation, heavier and more violent rainfall, more powerful and more frequent hurricanes and cyclones...

I would like to draw attention to a crucial facet of the problem, its time dimension. On the one hand, current emission levels and growth trends are suicidal. On the other hand, substantial changes are required of humankind in the very foundation of our civilization, and way of life, the energy sources we use. As a result, our inertia is enormous... but we are running out of time.

Let's see it "in technicolor" with graph 1, corresponding to the evolution of human CO2 emissions since James Watt invented the steam engine in 1769, which led to the first industrial revolution 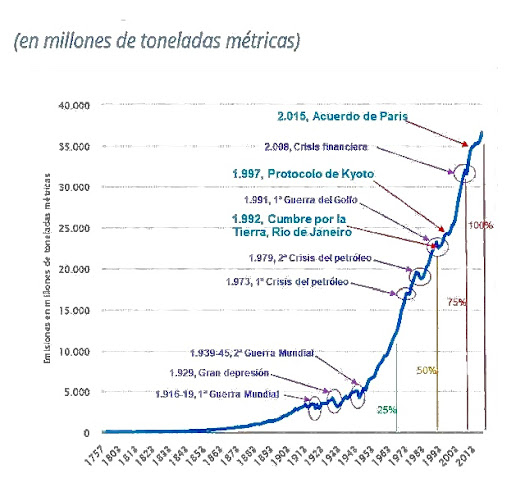 As can be seen, we are following an accelerated, exponential, and very worrying rate of growth:

It is inconceivable how long it is taking humanity to become aware of the problem and to start acting:

- In the 1970s, the first alarm bells began to ring among scientists. Meanwhile, other voices denied it (it is said that some of them were paid by the oil companies) claiming that climate change was not proven. That they were "normal" climate fluctuations. As a result, we did nothing (waiting to see who was right?). Since then, annual emissions have doubled.

- In 1992, coinciding with the Earth Summit in Rio, people became aware of the danger of climate change and began to talk about sustainable development. Since then (28 years), however, we have polluted as much as in the previous 223 years.

- In 1997, with the Kyoto Protocol, measures to reduce emissions were agreed... The reality? Today, annual emissions are 50% higher than they were then. CO2 has simply been traded.

Less euphoria, only in the five years since we got "serious" about the subject we have added 10% of all the CO2 emitted since J. Watt to the atmosphere.

A further unfortunate conclusion to be drawn from the graph: the better off we are ("buoyant - buoyant economy, rampant profligacy"), the worse off the planet is. The times when the curve is flattening out, or when its slope is decreasing, are always during wars or economic crises.

It is therefore urgent to act, to act now, and to act decisively, or we will not get there in time before the effects are devastating and irreversible.

How much should emissions be reduced?

Nature has resources to mitigate the effect of mankind by absorbing part of the atmospheric CO2 emitted: natural carbon sinks, such as forests and the oceans, in particular their marine biomass, especially phytoplankton and coral reefs.

But beware! With the deforestation of forests and the death of corals due to rising sea temperatures, we are also destroying our natural lungs.

To slow the rise in temperature, we should reach a neutral balance between our emissions and the capacity of natural carbon sinks to act. And we should reduce emissions even further to allow nature to reverse some of the warming caused by its action.

Our dear Pedro Casaldáliga, with his concise and accurate pen, in his poem "it is late," condenses in a few stanzas what has been said:

but it is our time.

but it is all the time

we have at hand

to make the future.

but it is us

Unfortunately, at this late hour, we will have to insist, "a lot".

So much for the time issue of Climate Change.  I hope you found it interesting. In a future chapter of the blog we will address the space issue of the problem: Do all countries pollute equally? How much do we each pollute?

We will also try to draw lessons for climate change from the Covid-19 experience.

I look forward to seeing you there!