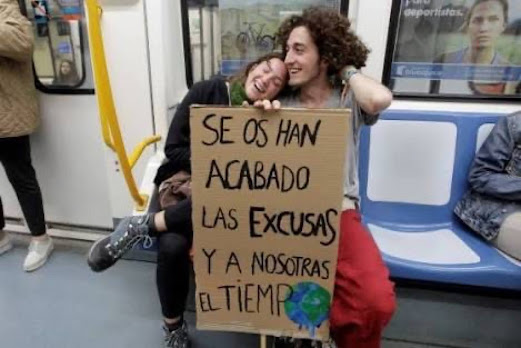 (or Climate Change in space and time). Part II

Member of the CLIP community

In the first part of this article, I invite you to visit it if you have not already done so, we reviewed the time dimension of Climate Change. In this second part we will analyze the spatial dimension of the problem: Do all countries pollute equally? How much do we each pollute?

According to figures for 2008 from Datosmacro.com, from the magazine Expansión, (https://datosmacro.expansion.com/energia-y-medio-ambiente/emisiones-co2) the distribution of CO2 emissions per capita by country is as shown in the map in figure 2. 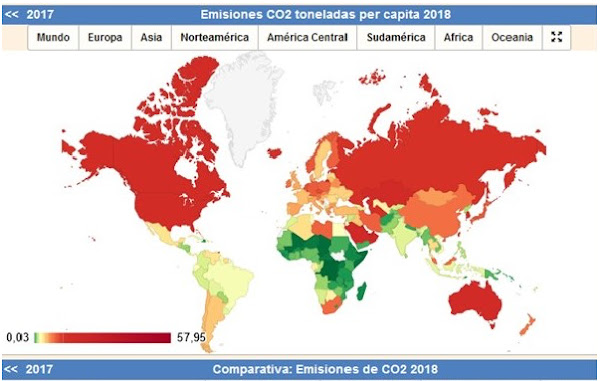 The ranking of the 12 countries that pollute the most is shown in table 1, where the following have been added for comparison: the 27 countries of the European Union (EU); Spain, which ranks 24th out of 184; the 15 republics that made up the former USSR; and the 6 countries of the Arabian Peninsula (with the exception of Yemen, which, being much poorer than the rest, disguises the figures for its neighbors). 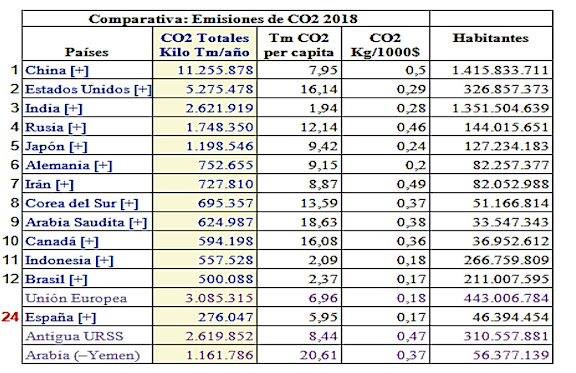 The biggest polluter is China since it overtook the USA in 2005. It is responsible for 30% of global emissions, with only 18.6% of the population. However, it's per capita emissions are less than half that of the Americans. India, the third-largest emitter, is interesting, as are Indonesia and Brazil (11th and 12th), which are among the lowest per capita emitters due to their very high population. These 12 countries together emit 73% of the world's total, with only 55% of the world's population.

It is clearly significant that China, the USA, and Russia (1st, 2nd, and 4th places), in their struggle for world leadership, have not committed themselves to the Paris agreement, since between them they emit half of the global CO2 when their population is only 25% of the world's population. Note also the relative importance of the EU's commitment to the environment, as the EU, seeking to act as a tractor for change, has stipulated emission reduction standards for all its members even though its per capita and GDP averages are not the worst. The EU as a whole, with 8.5% of emissions and only 5.8% of the population, would rank 3rd in the ranking. The same is not true of the former USSR as a whole, which is in 4th place, tied with India, with 7% of emissions, 4% of the population, and coefficients considerably worse than those of the EU, especially in terms of energy efficiency.

The Arabian Peninsula countries (excluding Yemen), which have an exaggerated average per capita consumption, with only 0.7% of the world's population, account for 3.2% of emissions and would occupy 6th place, almost catching up with Japan, which has twice the population.

Spain, we could say, measures up positively with the above, even with the EU average. It is interesting to compare it with South Korea, which has a population and GDP similar to ours and emits 2.5 times more. 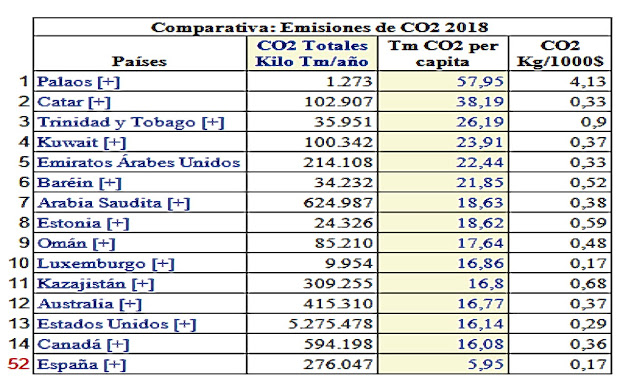 Table 2 shows us the ranking of the 14 countries that pollute the most per capita. Of these, the case of the "champion", Palau, a small archipelago next to Indonesia, is curious and intriguing, although due to its low population (22,000 souls) it is irrelevant. Less anecdotal is the fact that among the first nine positions are 6 nations of the Arabian Peninsula, with per capita emission levels between 17.6 and 38.2 tons/person-year, between 4 and 8 times higher than the world average of 4.8.

In this ranking, Spain occupies 52nd place with 5.95 tonnes/person-year, perhaps thanks to the fact that 13.9% of our energy comes from renewable energies and an additional 11.3% from nuclear energy (which does not emit CO2 although it entails other dangers). We are the 5th country with the highest installed wind power capacity. However, "the country of the sun" still has an irrelevant photovoltaic capacity. This is an unfinished business. Also interesting is the case of France, which ranks 61st with 4.96 mt/person-year, in this case possibly due to its high percentage of nuclear electricity. 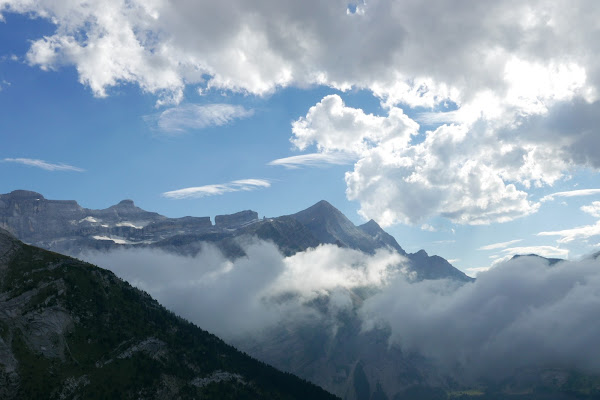 In developing his theory of relativity, Albert Einstein came to the conclusion that time could not be the inexorable and unalterable magnitude that we believe it to be, nor could it be understood independently of space. No. He showed us that they are linked and influence each other (velocity = space/time) and must therefore be taken into account together. He called this set the space-time continuum.

We should consider something similar with respect to climate change, in order to understand and correct it, we have to analyze it in its space-time continuum. How are the emissions of the countries evolving? 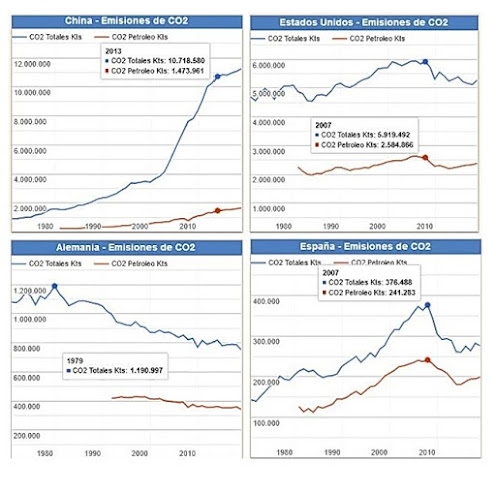 Illustrative examples have been included in Figure 3:

- There are the countries that are shooting up their emissions exponentially (upper left quadrant). These are countries such as China, India, Brazil, etc., which are in full economic expansion, fuelled, of course, by fossil fuels. Or like the Arab countries, which seem to care little about the environment.

- There is a second group of countries, the largest, which have not yet reacted and continue to base their growth on fossil fuels, although the growth of their emissions, like that of their economy, is less pronounced (upper right quadrant). This is the case for countries such as the USA, Russia, Japan, Italy, Portugal, Norway, and, unfortunately, Spain (lower right quadrant).

- The third group of countries, the minority, seem to be taking emission reductions more seriously and have been doing so for years (lower left quadrant). This is the case for Germany (since 1979), the UK, France, Denmark, Sweden, and Finland. I suspect that the progressive relocation of heavy industry, which is highly polluting, to countries with cheaper labor (which are in the first group) has also contributed to this trend.

The graphs also show the temporary effect of economic crises, such as the financial crisis of 2008. In all cases, the trend moderates or is truncated: in countries that were increasing their emissions because of economic expansion, and in those that were reducing them because there is less money available to undertake green initiatives.

An ancient Chinese proverb says: "the faint flutter of a butterfly's wings can be felt on the other side of the world". The American meteorologist Edward Norton Lorenz used that same idea to explain the chaotic behavior of unstable systems, such as weather when in 1972 he uttered the famous rhetorical question that has become popularised as the Butterfly Effect: "Can the flapping of a butterfly in Brazil cause a tornado in Texas? “.

Clearly, Lorenz and the Chinese were exaggerating, weren't they? Apparently not. A virus a hundred thousand times smaller than a butterfly is proving them right. Covid-19, infecting that first Chinese in Bukhán (or wherever), flapped its puny wings, causing the tsunami of the planetary magnitude that we are suffering so much in our way of life, in the economy, and in the 1.7 million fatalities that have been counted, so far.

From this pandemic, however, we can draw some important lessons that apply to the issue of climate change:

- Globalisation, so often mentioned and never really taken for granted, is a fact. For everything, good and bad. What we do affects everyone else. We have experienced it first-hand: today, in the antipodes, a Chinese person eats an infected bat and, as a consequence, four months later, an acquaintance or a relative of yours dies, alone, in the ICU of a hospital.

- The borders of countries are not impermeable, just because something happens outside my country, it will not affect me. Africa suffers from famine and war and as a result, an unceasing flow of refugees arrives at EU borders. While the virus was in China, the rest of the world went about its business. Before long, Italy was infected. We weren't worried either, with France in the middle there was no fear. What's more, two international football matches and a few tourists later Spain was already on its heels.

- Faced with a global problem, national solutions are not enough, a coordinated response from humanity as a whole is needed. Every man for himself will lead us all to catastrophe. There has been a dirty war between countries that have been shamefully stealing each other's masks. Fortunately, the UN's World Health Organisation, for all its shortcomings, has brought some order to this pandemic madness. Administering the vaccine will be a new test of mankind's humanity. If we have learned nothing, we will fail. It will be a new Titanic, where only those in the first class will have access to the lifeboats that are vaccines.

- The steeper the curve, and the higher its absolute value, the longer and more painful the sacrifices needed to bend it. In the case of CO2 emissions, both are extremely high. Hence the urgency to act NOW! and decisively.

- If nothing is done, or if it is not done in time (confinement; the transition to clean energy), the evolution could spiral irremediably out of control (with the overflow of the health system, the uncontrolled proliferation of viruses; with pollution, the proliferation of natural disasters and the rise in water levels with the consequent flooding of coastal cities... just ask the Venetians and the neighbors of Jakarta). 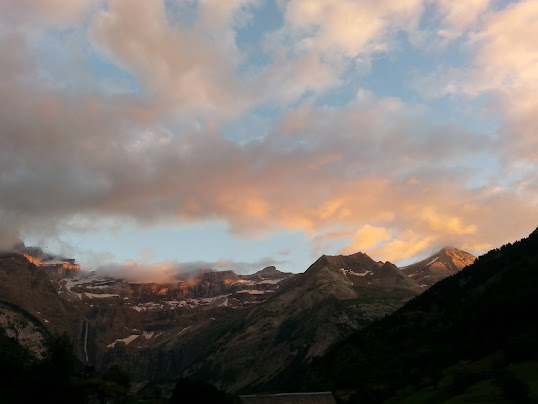 I think the analogy between the Covid-19 pandemic and the "ecological pandemic" is clear.

Let us consider for a moment the consequences that the coronavirus is having on our lives... Let us now imagine what the more devastating and long-lasting "ecological pandemic" may cause... Well, solving the problem of climate change needs to be tackled simultaneously in its spatial (global and coordinated effort) and temporal (now and decisively) dimensions. Neither a lazy global response nor a unilateral, even if radical, response by just a few countries will help.

The 2030 agenda and the SDGs are one (if not the) hope because they point, I believe, in the right direction: multinational action coordinated and supervised by a supranational body; concrete, quantitative and supervisable objectives; continuous management and monitoring. However, their success is not guaranteed, not only are the nations already behind in their implementation but also the objectives are possibly not ambitious enough for the challenge posed.

Even so, they are having the virtue of putting Humanity on edge, of making us aware that the danger is real and near. Now we need to overcome our inertia, to really take action.

The news is full of sand and lime in the news:

- The Spanish government aims to reduce CO2 emissions by 23% by 2050, but some NGOs argue that the reduction should be 50%.

- The election of Biden as the new US president raises hopes that the US will commit to the Paris protocol. We shall see.

- China has announced that it intends to peak its CO2 emissions in 2030 and to be CO2 neutral by 2060. It will not be easy to achieve this. Even so, announcing this decision implies a radical change of attitude, unthinkable a few months ago. Den Xiao Ping, its president, made these declarations before the UN General Assembly, where he added that they understand the Covid-19 pandemic as a serious warning that nature is sending us, and that we had better not ignore.

This planet Earth is an oasis, an orchard of life in the lifeless desert that is our Universe (at least the one we can reach). Our world is not only a jewel of balance and beauty, it is also our livelihood and only possible home. We cannot continue to abuse it irresponsibly. We must learn to steward it wisely, preserving it for the future.

As a species we have been given a great gift, to be "Sapiens". And this, as someone said, carries with it a great responsibility.

But let's go back to the movie "The War of the Worlds" (remember the introduction of Part I). Faced with a common threat, the nations manage to unite for the first time and stand together against the invader. But it is not the human species that defeats it, but Nature itself, which neutralizes the threat by using an "Earthling" virus that will prove lethal to the aliens...

Member of the CLIP community