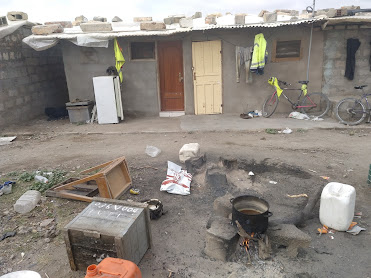 The impact of COVI 19 in the cities The UN reminds us that it will be most devastating in poor and densely populated urban areas, in slums where overcrowding makes it difficult to comply with recommended measures, etc.......

You don't have to be a great expert to realize the conditions and urban planning that we have made of our cities. With the massive exodus of people from the countryside to the city in the 1960s, we built neighborhoods on the outskirts that were full of huge blocks of flats. The idea was to make the most of the land, minimizing the services. They were purely economic measures, which were aimed at obtaining the greatest benefit, at the expense of people's quality of life. There were few green areas and 50, 60 and 70-meter homes where large families lived, public transport was scarce and overcrowded. Some neighborhoods without health or cultural centers, etc. If we refer to migrants, this problem is even more serious

This is the case all over Europe. A part of the country has been emptied (abandonment of the countryside) and a large concentration in provincial capitals

We are realizing through the pandemic and the situation we are living in that all the ODS (recommendations made by the UN to ensure the sustainable development of the planet) are transversal. For example, no. 11 deals with cities, and no. 3 with health. That is why our VIEW OF REALITY must be both global and concrete. Our discernment is aimed at seeking the causes of why the virus does not affect all people equally (social classes) and the ACTION we have in our hands to take care of ourselves (the common home and humanity).

In my city, Elda, the consequences of this pandemic on people's lives are being devastating; loss of employment, people losing their homes, a very affected economy (since a very high percentage is underground economy, with little culture of leisure that is not linked to consumerism. A reality that makes new forms of poverty visible, the world of work increasingly poorer and the poor increasingly excluded and even more bloody for the most vulnerable, women, older people, migrants, etc.....

Pope Francis made this very clear at the World Meeting of Popular Movements. He reminds us Christians to work for the dignity of the person and he does so in a very simple and radical way. Working the three Ts: WORK, EARTH, AND ROOF

Faced with this situation, there are political initiatives that are going in the right direction. I would like to point out one fact. For example, in the Valencian Community, the Generalitat is promoting various initiatives and forums to encourage the ODS at the municipal and regional levels: "THE ALLIANCE OF CITIES FOR SUSTAINABLE DEVELOPMENT" approved in the plenary session of 15 January 2016.  It is not the majority. Despite the initiative, it is true that there are still many difficulties in finding local agendas on the ODS and even more so in implementing ODS 11 as there is a great deal of ignorance and low participation.

Faced with a capitalist system that kills and discards the most vulnerable people, Pope Francis calls us to the globalisation of hope, which is born of the people and grows among the poor. It must replace this exclusion from globalisation and indifference.