Immigrants in the COVID19: one of the essentials. Spain, EN 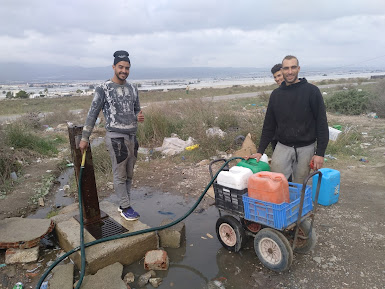 Immigrants in the COVID19: one of the essentials. Spain.

The living conditions of immigrants and the pandemic

Juanjo is a member of cmf Christian communities

As with any natural disaster, the most vulnerable are the most affected. We are not all the same. SARS-COV-2 does not affect us all equally. We are not in the same situation of risk from our socio-economic possibilities - it is not the same to go by public transport as to go by private car, and it is not the same to live in a single-family home with a garden as to live in a crowded flat with several families. Nor do we all have the same access to the means to protect and care for ourselves.

In Madrid, we are living through an episode of confinement of the neighborhoods marked by their "way of life" that has deployed a toxic discourse. I think we have to talk about LIFE CONDITIONS and become aware that inequality and social distance is a path carved out decades ago that has even cut down on the right to care for people in our country.

The harshest words used by Pope Francis on refugees and migrants

A recent report by the FOESSA Foundation once again portrays the profile of the excluded and impoverished, characterized by low or no income; with informal, low-skilled and highly precarious jobs, or without work; with emergency housing problems leading to greater overcrowding; without access to the virtual community (digital divide) - which makes equal opportunities in education difficult; often with family conflicts; with physical, mental health problems or disability.

The consequences of the pandemic accentuate the deterioration of excluded and impoverished families with a further reduction in income and an increase in people in severe poverty; there is a massive loss of jobs (including in the underground economy). Many difficulties are evident in reconciling employment and care of children and the elderly.  Furthermore, confinement worsens a psycho-emotional and physical state that is already affected by these living conditions. Anxiety and conflict increase, while concern about an uncertain future and fear gain ground.

The pandemic has led us to uncertainty and to emphasize the need to care for fragility. Compassion and care are more vital than ever. Some are safe, others are at risk, and there is a group of uprooted people where neither the family nor the immediate environment can even accompany them.

We are going to focus on one of the most excluded and impoverished groups in our society, the immigrant population. They are often people in informal employment or the informal economy (seasonal workers, domestic workers, carers of the elderly or disabled, street vendors,...). I wonder... who are the essential workers? The neglect of our brothers and sisters in this culture of discarding, makes us realize that they are not mere "services". We take for granted many things that are covered thanks to their work and dedication. For this group, the paralysis of the economy means the total absence of income and the maximum lack of protection since, due to the nature of their activity, they do not have access to many of the aids that the Welfare State can provide.

Furthermore, some of them are sometimes in an irregular administrative situation. The increase in irregularity among the immigrant population served by Cáritas has increased by 10 percentage points, from 23.2% in 2008 to 34.2% in 2019. This increase has been largely due to the so-called "supervening irregularity" of many people who have been interrupted on the path we had mapped out for their integration on the basis of work and residence permits which are increasingly unviable. Thus, immigrants in an irregular situation live badly, in submerged economies with a treacherous interest in the common good - since it expropriates the contribution and regulation of labor rights. They live without the right to social benefits, and with the fear of being expelled.

With the pandemic, there have been four worsening of the living conditions of immigrants:

1.         The interruption of administrative procedures and formalities: renewal of work and residence permits, difficulties with work permits -irregularity-, international protection.

2. The increase in the number of migrants demanding coverage of basic needs: food and payment of supplies and rent.

3.         The increase in overcrowding and precarious housing. The situation in settlements in temporary agricultural areas is worsening: substandard housing, hygiene, sanitation.

4.         The incidence of the digital and educational gap, in minors who are learning the language.

It is important to take perspective and try to see the incidence of immigration in our Western world. "Un arraigo sobre el alambre" (A rooting on the wire) is a recent study by Cáritas in collaboration with the University of Comillas, which response with scientific rigor and a comprehensive view of social cohesion, to the reality of a common future. 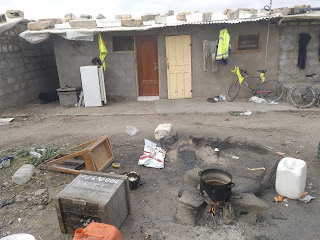 However, the structure, measures, and procedures of our society mean that they are rooted in the living conditions in which we welcome and support them, which generates the social distance. Immigrants are over-represented at the bottom of the occupational structure: caretakers, laborers, waiters, kitchen assistants, ... Their upward mobility on the social ladder is reduced and limited. Their labor status is very precarious, as they have been expelled from the basic and core social norm of employment in our societies. It is demonstrated in the immigrant population the high incidence of informality, the high incidence of unemployment (60%), the majority of temporary work - 44%, compared to 22% of the Spanish population - low and irregular salaries, low income, and the high incidence of poverty - more than double that of Spaniards.

Its contribution as a fundamental axis of the country's economic and social development has been proven - without reproach - as it allows us to be profitable and competitive in the new globalized markets in a model of intensive growth based on low-productivity sectors, to carry out domestic and essential care tasks in an aging society, and its high rate of activity and youth sustains and balances our Welfare State, especially the pension system. We insist that they contribute much more than they consume. It is important to be aware of the structural phenomenon of immigration that runs through our economy, our social welfare, our demographic evolution, our daily coexistence, ... and to place from there the political actions, injustice.

The Crisis for Syrian Migrants

Although the pattern they follow is one of mixed socio-cultural integration or interculturality, bringing together both traditions - that of their country of origin and that of Spain - they are resistant to the tendency towards segregation that we see emerging in these times.  The spread of the pandemic has become "ethnical" - just like other social conflicts. That is, the increase in contagion, some explain it from the presence of immigrants, from their "ways of life", and not from the action of decades of social and economic policies of segregation in the city that have consolidated social inequality in the territory and living conditions of greater risk.

Ethnic and social diversity is an inherent part of our reality. Immigrants are among us, firmly rooted and established, in spite of the stones we have placed and continue to place in their way (census, residence, and work permits, family regrouping,...). They are calling us to A NEW, more diverse, and multiple OURS, which includes them, but they are threatened by the growing precariousness and the persistence of ethnic prejudice towards the other, the immigrant.

Mention that the network of the Church, Migrants with Rights: hospitality + dignity, has recently offered various ways to join the movement of solidarity and integral welcome to immigrants.

Finally, I cannot help but consider that we are facing a global problem, with disruptive power, that needs answers and multilateral governance where the center is people - not the economy - human life - not political ideology - and improvement towards dignified living conditions for the well-being and common good of all.