Citizenship Income: "do not forget the poor". Spain. SDG10 EN 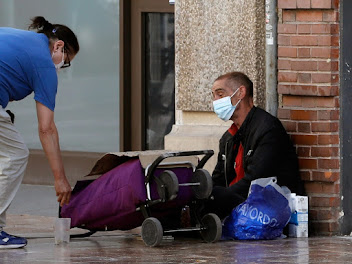 Director of the Secretariat of Catholic Action

A stubborn reality has once again shown us that the welfare state still has major shortcomings in providing protection to the most vulnerable in society:

- 3.4 million workers affected by an ERTE.

- 1.4 million self-employed persons have ceased their activity (applications for aid for cessation of activity).

- 1.1 million families with all their members unemployed

- 1.4 million unemployed have been in this situation for more than a year

There are many voices calling for overcoming the current shortcomings of the welfare state through a citizenship income. Last Easter Sunday, Pope Francis, in a letter to social movements and organisations, stated that "This may be the time to consider a universal basic wage", "It would ensure and concretely achieve the ideal, at once so human and so Christian, that no worker without rights".

The Autonomous Communities already have some kind of income in place in their territory in order to combat social exclusion.

Last June, the Minimum Living Income (MVI) was approved in Spain with the aim of preventing and fighting poverty and social exclusion in Spain.

The explanatory memorandum of the law regulating MVI clearly states that "This benefit was created with the main objective of guaranteeing, through the satisfaction of minimum material conditions, the full participation of all citizens in social and economic life, breaking the link between the structural absence of resources and the lack of access to opportunities in the labour, educational or social fields of individuals. The provision is therefore not an end in itself, but a tool to facilitate the transition of individuals from social exclusion imposed by the lack of resources to a situation where they can develop fully in society".

Beyond what is happening in Spain, poverty and exclusion have a global dimension, which is why last 23 July the UN proposed the immediate introduction of a basic income or a temporary minimum income for some 2.7 billion people living below or very close to the poverty line - more than a third of the world's population - in order to slow down the advance of the coronavirus and, I would add, poverty. The implementation of a basic citizen's income would eradicate poverty in 66 countries, benefiting 185 million people, and at the cost of only 1% of the GDP of these economies (Brookings Institution).

As long as states are not able to ensure full and decent employment, measures must be put in place to prevent the impoverishment and exclusion of millions of people around the world. Our faith in Jesus Christ the Liberator demands that we "do not forget the poor" (Gal 2:10)

Director of the Secretariat of Catholic Action