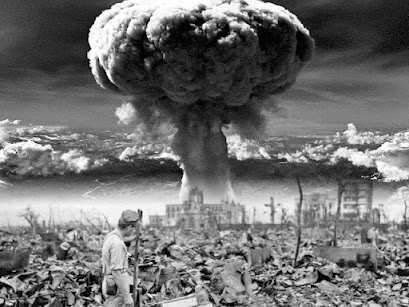 On the 75th anniversary of the atomic bomb over Hiroshima

Bishop of the Diocese of Fukuoka

He was Superior General of the Claretian Missionaries

I am in Hiroshima. Today is August 6th. Seventy-five years ago, this very day, a single bomb wiped out the lives of thousands of people and wreaked unimaginable destruction on this city. We, the bishops of Japan, have gathered here on this 75th anniversary of the tragedy of the dropping of the atomic bomb on the city of Hiroshima. We have prayed together and renewed our commitment to peace and nuclear disarmament.

From the residence where I find myself this morning, I look out over a part of the city and one of its many channels. I think that, 75 years ago, at this time of the morning, many people were living the anguish of a war that was intensifying day by day, perhaps worried about some family member who was fighting in one of the scenarios of an inhuman war, like all wars. Most families would be sharing breakfast ready to start a new day, waiting for the moment when they could again live in peace.

At 8:15 in the morning, a terrible explosion took the lives of many of these people and marked the history of humanity indelibly. Science had produced a weapon with a destructive capacity unknown until that moment. The absurdity of war had reached unimaginable limits. Everything had been subordinated to that lethal logic of war that makes people lose sight of their dignity and the sacredness of life.

I am looking at the streets, the houses, one of the canals of the city of Hiroshima. I can imagine what happened on that August 6, 1945. Those who were not immediately killed by the explosion and the radiation were wandering around a destroyed city looking for a place to take refuge or be cared for. The radiation had produced irresistible burns and destroyed the internal organs of those bodies martyred by the bomb blast. Many found death. There was no distinction of age, ideology, nationality, etc. Wars lose them all, even the victors because all they generate is death and desolation. Today we remember it with deep pain, with extreme compassion.

Our prayer welcomes the desire that these situations will never be repeated. Our prayer also expresses the commitment to work tirelessly so that peace, respect for the dignity of each person, and each people, and care for creation may be the only objectives that guide the journey of a humanity already tired of so many wars.

Before the celebration of the Eucharist, we listened to the words of Pope Francis during his recent visit to Hiroshima on November 24 last year. We felt again challenged and encouraged by them.

"The use of atomic energy for war purposes is immoral, as is the possession of atomic weapons, as I said two years ago. We will be judged for this."

And Francis recalled the words of Pope Paul VI: "In fact, if we really want to build a more just and secure society, we must let the weapons fall from our hands: "It is not possible to love with offensive weapons in our hands" (Paul VI, Address to the United Nations, 4 October 1965, 10). “

It will be useful to re-read today the brief but powerful speeches of Pope Francis in Nagasaki and Hiroshima last November.

Meditating on these words, at 8:15, we joined the minute of silence of the people gathered in the Hiroshima Peace Park (this year in limited numbers because of the COVID-19 crisis) and all the rest of Japan. This silence still echoes the cries of those who died in Hiroshima and those who continue to die in the wars that continue to martyrize humanity, especially the poorest.

The celebration of the Eucharist has opened our hearts to hope: love is stronger than hate; life is stronger than death. Because we believe this, we continue to fight for justice and peace without ever losing hope.

I walked from the cathedral to Hiroshima station with the Salesian religious bishop of Saitama. We crossed a few streets and two of the many canals that exist in the city. We remembered the many people who, full of radiation burns, thought uselessly of finding relief in these rivers and canals.

Visiting the city of Hiroshima today does not leave one indifferent. Returning home, I felt the need to renew the commitment to work for peace and justice that makes it possible. This little piece of writing that I share is part of that commitment.

Lord, give us wisdom and courage to work for peace.