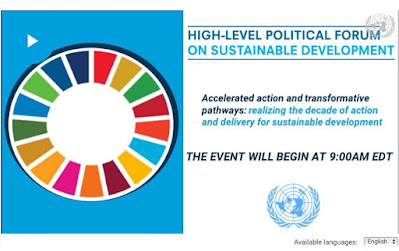 We celebrate the 75th anniversary of the founding of The United Nations. On the other hand, after a period of implementation and review of results, ECOSOC had the intention of presenting improvements in the procedures for implementing Agenda 2030. Since the COVID-19 pandemic was declared in January-February 2020, everything has been tinged with "viruses." It could not be otherwise.

Only six months have passed, and we already have more than half a million deaths from the Coronavirus. The consequences on health, education, trade, employment, debt, social inequality within and between countries, non-standard jobs, domestic violence, are devastating. An estimated 400 million jobs have been lost: 18% in the Americas, 13% in Europe and Central Asia, 13.2% in the Middle East, 12.1% in Africa.

The first day of the High-Level Political Forum (HLPF) on the implementation of the ODS2030 Agenda has faced the challenge of assuming and integrating the consequences of the COVID19 in the development of the Agenda. The official and unofficial program for the next two weeks addresses this issue from all possible angles.

The message is clear: the achievement of the objectives was slow but well underway. The number of countries determined to implement Agenda 2030 with legal measures was growing. Although issues such as social inequality and poverty, were increasing, other parameters, such as the death of pregnant mothers or children under five, were improving. The COVID-19 has stopped the improvements in their tracks, has worsened the reality, and is leading us to a challenging social and international situation.

Faced with this reality, the UN and its ECOSOC (Economic and Social Council), the matrix of Agenda 2030 and responsible for its follow-up, states that the path to the recovery of humanity lies in: a MULTIRATERALISM that takes on the Agenda 20303 of Sustainable Development Objectives, as a "roadmap." If we analyze the reasons and consequences of the COVID-19, we find the problems and urgencies that gave rise to the formulation of the 17 ODS as a response.

We are, therefore, at the beginning of an HLPF on Agenda 2030, which is atypical. Or rather, realistic and incarnated, which assumes as its own the current situation of the world, integrating, directly, the COVID-19 and its consequences in the center of the analysis of the ODS2030. The question of these weeks of HLPF could be: How can we respond, from Agenda 2030 to the situation created by the COVID-19? Objective: to restore the devastated world and change structures, values, and ways of acting, so that this does not happen again.