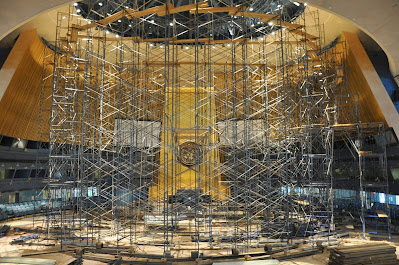 No. It is not a mistake. We call it the "diamond wedding anniversary" if a couple celebrates their 75th wedding anniversary. But, for an organization like the UN, 75 years marks its "silver anniversary." We are confident that the organization will celebrate more years, but it needs some changes from time to time. When you celebrate 25 years of marriage, it is better to look back and see when it all started and how the relationship evolved over the years. It is also convenient to look ahead and make plans for the future. For this reason, the framework in the morning of the last session of HLPF was: Multilateralism after COVID 19: what kind of UN do we need at the 75th anniversary?

Recalling the history of the UN, we well know that it was founded in 1945 after World War II. The great European empires had fallen, leaving the chessboard to the USA and the USSR. The war had taken millions of lives. Many of them were European, but also from the African and Asian colonies. The fallen empires after World War II were not only European, they were also the Japanese Empire that massacred the lives of millions of Chinese, and the same Chinese Empire that transformed into the People's Republic of China. The end of World War II brought the beginning of the emancipation of the Asian and African colonies and the new configuration of Europe and the world. A worldwide upheaval. That was 75 years ago. Since then, the Cold War, the Missile Crisis, the fall of the Berlin Wall, the Gulp War, the Invasion of Iraq, the Twin Towers, the Atocha attack, the First Arab of North Africa, and now, COVID-19.

HLPF said that we are all participants in the middle of a great convulsion caused by the Coronavirus. Big changes are yet to come, almost unimaginable. All the participants, including China and India, have said that they are unequivocally committed to Multilateralism, to the UN and to the 2030 Agenda for Sustainable Development to "leave no one behind." Those who have said this have been Prime Ministers or Foreign Affairs Ministers representing the United Nations coordinating groups. We have to wait and see, for example: How is the pandemic evolving? When is the vaccine be available? Who will be elected President of the USA? How does China's expansionary desire progress? How is the reorganization of the European Union? What steps taken for greater coordination in Latin America and the Caribbean? How is the Pan-African Organization evolving?

There are certainly many questions, but as a couple celebrates 25 years of marriage, there will be good than bad in the future. UN reform will come. UN-based Multilateralism will arrive with a project for the future of the world like the 2030 Agenda. More than ever, Civil society organizations can participate in the construction of this new world, we must do it. Excitingly intense years await us.

Don't you think that we should not deprive our students of knowing these stories and actively participate in the change? Don't you think that as Churches and as Claretian Missionaries we have to actively participate, locally and globally in what has to be built? Not to it would be staying out of this world; not doing it would be not being faithful to our Christian and missionary vocation.