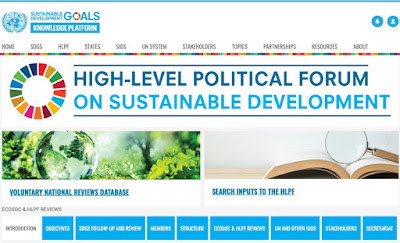 In September 2015 the General Assembly of the United Nations approved the Agenda 2030 of Sustainable Development Goals. the High Level Political Forum (HLPF) began shortly before (2012) as a decision of the Rio+10. The Economic and Social Council (ECOSOC), one of the permanent and founding bodies of the UN, had been charged with coordinating the work of developing Agenda 2030 and was also to be responsible for monitoring compliance with the agreements of the Agenda.

The ECOSOC had been in charge of coordinating the infinite number of agencies created by the UN, throughout the years since the foundation of the Organization (San Francisco 1945). The coordination of these agencies became increasingly complicated, mainly due to their number. Three areas have been specific to ECOSOC from the beginning: Economic Development, Social and Human Development, Ecology; the High Commissioner for Human Rights has always had a very close relationship with ECOSOC.

ECOSOC worked on developing an agenda, focused on its three main objectives, to achieve sustainable development. For this purpose, it not only relied on internal UN experts or delegated diplomats but also opened the work to the active participation of Civil Society (NGOs, companies, universities, researchers). The collaboration of so many agents has allowed the creation of an Agenda that integrates the best of the resolutions of the summits promoted by the UN Agencies and the Non-Governmental Organizations. We have a working horizon for the future of humanity and a framework in which the UN Agencies will be able to coordinate more adequately.

The UN Assembly created the High-Level Political Forum (HLPF) on Agenda 2030, to monitor compliance with the ODS. Each year the HLPF is convened at UN headquarters in New York for two weeks. The first week is devoted to reviewing compliance with part of the ODS. In the second week, countries present, voluntarily, the programs for implementing the ODS in their respective countries. All 54 states elected every three years by the General Assembly are represented at the HLPF. Along with these 54 countries, representatives from Civil Society organizations involved with the Agenda are present. The groups of organizations that have a delegate are: children and youth, farmers, indigenous peoples, city councils, NGOs, the scientific community, women, unions, persons with disabilities, volunteers, elders, education and universities; all the organizations have to have the consultative status before the ECOSOC, a qualification that we, the Claretian Missionaries-PROCLADE, have.

The HLPF holds the official meetings during the two weeks. Along with these meetings, the UN agencies organize "official side events," and the civil society organizations recognized before ECOSOC also present their "side events. All HLPF attendees can participate in every meeting, provided they have the appropriate accreditation. As a result, HLPF is an incredibly rich and diverse gathering around the themes of Agenda 2030. It is, as you can understand, impossible to be present at every event; you have to prioritize and choose. I include a link to the HLPF website so that you can become aware of the dimension of these two weeks of the meeting. This year 2020, due to the COVID-19, all the sessions are being done through the Internet.