From the ground. Women, Inequality and violence. Colombia. SDG 5 EN 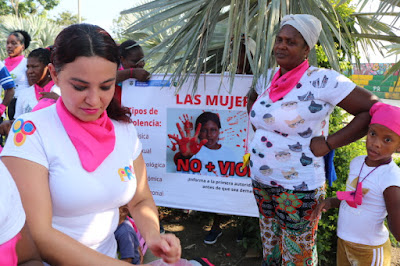 n Colombia, the historical disadvantage of women (unfortunately naturalized for a long time) is reflected in their high degree of vulnerability, for example, they are forced to accept degrading work, poorly paid or in informal employment conditions, in general, they work more hours than those agreed upon for work, and they also have to do almost all the domestic tasks: taking care of the children, cooking, cleaning, without their partners being equally involved. The situation of working women is not favorable, but when we observe their reality and the conditions on which they depend economically, the result is devastating. A very high proportion of women (unlike men) have no income of their own, and this has contributed to the reproduction of patterns of submission by women and verbal, psychological and physical mistreatment of them by men since lack of economic autonomy is one of the most recurrent causes for legitimizing these abuses.

These situations do not allow dignity for women who also have their other rights violated, such as the right to health and adequate food. Fortunately, the situation of women in terms of education has improved, they have achieved better levels of promotion than men, this makes them more competitive and lets us think that their interest in education is greater.

The forms of violence against women harbor a number of elements of pressure and abuse, which are the result of the naturalization of violent practices based on gender and those derived from the armed conflict within a complex situation of intersections that bring with them marginalization, exodus, deficiency in the quality of and access to education, few inclusive scenarios for women and girls, within a macho culture internalized by both sexes and a wide margin of impunity.  In this context, women are unable to access levels of economic, organizational, and political participation, much less in decision-making spaces. Therefore, they need to strengthen their community processes so that they can build organizational plans and economic strategies to counteract the effects on their lives, integrity, and security.

-As of 2019, the salary gap between men and women was 21% despite the fact that Colombian women outnumber men in education.

-They have less than 20% participation in elected office.

-In 2019 more than 500 women were murdered, 90% of the reported femicides went unpunished.

-74% of Colombian women have suffered from gender violence.

-The margin of impunity with women victims is 97% according to the Institute of Legal Medicine.

-More than 30,000 victims of sexual violence in the armed conflict, more than 90% of them are women

The historical and structural condition of discrimination, inequality, and vulnerability of women belonging to indigenous groups and Afro-descendant communities, which in itself is clearly accentuated and even more serious than the situation of the country's women in general, is also exacerbated by the armed conflict, generating for them greater exposure to the gender risks outlined here and are major barriers to achieving the aspirations of the ODS 2030 agenda.

The Colombian conflict, which has developed fundamentally in the Colombian periphery, mainly and extensively affects women belonging to ethnic groups: of the total number of women identified as victims, 385,921 are of African descent, while 94,944 belong to indigenous groups in the country.

To this extent, it has been demonstrated by various sources that it is the population that has been most severely affected by the crimes, injustice, and inequities that are a constituent part of both armed violence and displacement and the status of the victim. The Inter-American Commission on Human Rights points out in a special report that the situation of indigenous women and women of African descent is particularly critical because they are victims of multiple forms of discrimination based on gender and ethnicity.

From birth, they face two layers of discrimination: the first because they belong to their ethnic group and the second because of their biological sex. Being historically exposed to two forms of discrimination, they are doubly vulnerable to being abused and victimized by armed groups in their struggle to control resources and territories, since these actors exploit and manipulate factors of social disadvantage in certain groups as a strategy of war, and in the case of indigenous and Afro-descendant women, there is more than one factor of vulnerability that they can abuse.

Women victims of the armed conflict, of various ethnicities, territories, and ages have been affected by this war throughout the country. They have experienced unspeakable suffering and recurrent abuse of their physical, sexual, and psychological integrity. The intersection between gender, ethnicity, age, and location in the conflict territory operates to deepen discrimination against women. (Taken from The Truth about Women Victims of the Armed Conflict in Colombia (Volume II. Women's Pacific Route 2013).

It is important to be emphatic that when talking about gender inequalities, we are talking about those that cross the HALF of the world's population and that these inequalities are one of the main barriers to achieving human development, which is why the ODS slogan of "leaving no one behind" takes on special relevance. In Colombia, there are enormous challenges in advancing toward the 16 gender goals that are on the ODS country's agenda and for the benefit of 51.2% of the national population, goals that intersect with pending justice, because it is a country with one of the highest levels of inequality and socio-political violence in Latin America.

From our presence and action in deep Colombia, it is the women who weave life from the mixture of the cry for justice and the song of joy, it is they who from knowledge and memory contribute to a truth of the conflict without statistical frivolity, it is they who grain by grain multiply the hope to raise families and communities so that we will continue to walk by their side to build inequality and equity.