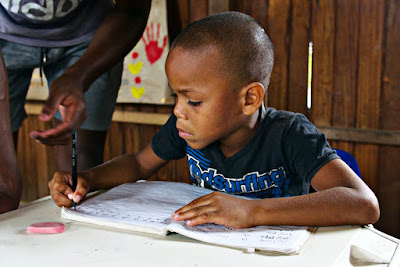 Colombia has made significant progress in education; however, one cannot speak of universality. According to the OECD, 87% of children between the ages of 5 and 14 are not enrolled in any educational institution. Moreover, according to analyses by competent bodies, 62 per cent of young people who have completed their secondary education have not been able to gain access to higher education, and 40 per cent of children who do not attend school are in areas of armed conflict.

With regard to Colombia's rural areas, the Niñez Ya Foundation states that 70% of rural educational establishments will not have sewage systems by 2016. Furthermore, the distance between these institutions and the children is between 8 and 13 kilometres, highlighting the profound inequalities between urban and rural areas in the enjoyment of this and other rights, where illiteracy is four times higher than in the cities.

In the field of higher education, OECD mentions that only 22% of people between 25-64 years old have a university degree, since access to it is limited, either because of economic shortcomings or because of the low coverage (existence of sufficient venues and quotas) in public higher education institutions.

- Gross coverage rate in secondary education: 62.2% sixth in the country

- Higher education coverage is 24.4%, in the last 8 places in Colombia

- Illiteracy rate for the population aged 15 and over 13.3%, the second worst in the country after the Guajira

- The illiteracy rate for the department of Chocó is 9.9 per cent, which is above the national average.

- In terms of educational quality, the department of Chocó is below the national average, with 192 and Colombia with 253, in relation to test results know 11 2019

Challenges for El Chocó in relation to the ODS4

As a result, the Government has set the following goals until 2022 when its term ends:

- Generation E will benefit 336,000 young people by the end of the four-year period with access to high-quality programs through the Equity and Excellence components.

In a department with so many shortcomings and challenges, Chocó, education will be fundamental to overcome structural problems of inequality and the effects of war. Unfortunately, the budget cut for 2020 by more than 100 billion pesos questions the intentions from the national level to settle the social, economic, political and moral debts on the Colombians, but especially with the population historically marginalized from the project of the country as Chocó is.

Specialist in public policies for equality