From the ground: Zamboanga, Philippines EN 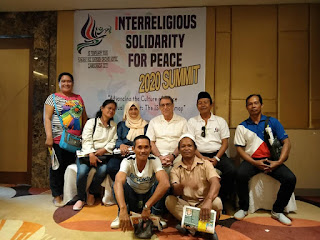 Justice and Peace: The ZABIDA Experience

There is a video at the bottom

The decision to consort as ZABIDA (Zamboanga-Basilan Integrated Development Alliance) in 2007 was a consensus of four non-government organizations with track records of service in the area. In Zamboanga City we have Katilingban Para Sa Kalambuan, Inc. (KKI), Peace Advocates Zamboanga (PAZ), and Reach Out to Others Foundation, Inc. (ROOF) and in Basilan Province, Nagdilaab Foundation, Inc. (NFI).

Zamboanga and Basilan are two realities situated in the heart of Mindanao but historically very diverse. Zamboanga was the base of the colonial presence for many years- centuries and remains the center of the social, military, business, and other services of the region. Basilan - the island across the strait from Zamboanga City – has been dominated by multinational businesses and conflict. Still, the capital city of Isabela does not belong to the ARMM (Autonomous Region of Muslim Mindanao), and is officially considered a component city under the Zamboanga Peninsula. Very diverse and yet sharing the challenges of multiculturality and a history of dominance and marginalization.

The twin problems of poverty and peacelessness are common to provinces in the Zamboanga peninsula and Basilan which are identified to be among the poorest in the Philippines.[1]  The protracted conflict and consequent disempowerment and low participation of local Mindanao communities in the long-term pursuit of their development and of the immediate solutions to urgent problems have contributed to a precarious state of human security (SDG 16).

To us, the application of Human Security has been the moral imperative underpinning the ZABIDA response to the challenging forces that have threatened the life and dignity of most of our people, i.e., poverty, violence, human trafficking, drug abuse, climate change and terrorism (SDG 01, 13, 16).  Such threats cannot be tackled through conventional mechanisms alone. They require a new consensus that acknowledges the linkages and the interdependencies between governance, development, human rights and peace.  Thus, it is liberational in that the configurations of Human Security would be defined in terms of freedom from want, freedom from fear, freedom to achieve development and live in dignity.

The key has been to work towards the EMPOWERMENT of the marginalized sectors to reclaim their rights, uphold their dignity to create conditions of harmony and peace overcoming fear and want. Conscious of the varying human security issues and concerns affecting the basic vulnerable sectors of society particularly the women, youth and children, internally displaced persons, farmers and fisherfolk, and indigenous communities, a menu of supports to the people has to be carried out.

These have focused on ZABIDA’s community-based services on economic security, peace, governance, and security reform for poor -urban and rural - communities.  Specifically, the four partners, while pursuing their respective projects and coordinated by the Regional Program Management Office based at its Central Office, have engaged in programs to achieve the following results:

1.     Enhanced capacity and participation of local government units (Barangays and Municipalities) on participation and transparency and at the same time working with sectoral groups in the communities in formulating and implementing effective gender-responsive policies and development plans. (SDG 05,16)

2.     Intensified advocacy for the rights of women, children, and other marginalized sectors and improved mechanisms to increase access to basic services like housing, health, water and sanitation, education, and livelihood. Katilingban maintains two centers for children: Akay Kalinga that cares for the street children and Tanglaw Buhay that cares for the victims of child trafficking. (SDG 03, 05, 06)

3.     Strengthened promotion of the culture of peace in schools- especially the integration of peace education into the curriculum, training on Culture of Peace in community, civil society and government institutions, and advocacy by the Interreligious Solidarity for Peace Movement. (SDG 04, 16)

4.     To implement gender-responsive ecosystem-based disaster risk reduction and management… and climate change mitigation  and adaptation mechanisms in coordination with local stakeholders, like the creation of VERDE ZAMBOANGA (Zamboanga) and GANDAN GANDUN (Basilan) integrating government agencies, universities and civil society to take care of the environment and educate the communities on the effects of climate change. (SDG 03, 05, 09, 13)

Finally, we have been able to consolidate the Interreligious Solidarity for Peace (ISP). The group is made up of Christians - Catholics, Protestants/ Evangelicals; Muslims from different groups and affiliations; and lately the incorporation of representatives of the Indigenous People - all leaders in their own right as well as spiritually-motivated citizens and faith communities.

The activities of ISP has been guided by the central belief that religions are the resources that contribute to harmonious relations, rather than conflicts in a community. Thus, woven into an interfaith matrix of dialogue and solidarity, the spiritual traditions of Islam, Christianity, and other religions are the spiritual wellsprings that yield the norms and values that underpin the culture of peace.

This group currently coordinates a series of activities to promote human rights, conducts education for peace at various levels of formal education, and carries out its peace advocacy on a multi-level and multi-sectoral audience that includes children and youth in-school or off-school, soldiers, the police and other armed groups, teachers, and community leaders.

Our work tries to offer a unique understanding of life that conceives of peace as the center of human behavior and of communitarian relationships. This is an alternative to all the existing manifestations of violence in society, trying to replace them with new social structures that encourage relationships and processes of living together in peace.   This gives place to a new type of education that accommodates differences and manages dissent.  It believes in the search for peaceful alternatives that abound.  Otherwise, the tendencies for violence become stronger with limits imposed upon human creativity.

These new cultural styles imply above all an attitude of acknowledgment and mutual respect, accepting cultural differences of all the different groups with a special sensitivity for the cultural and religious elements of the diverse communities. A culture of peace implies a deep encouragement of reconciliation, acknowledging our wounds and capacities for violence that marked our history. Only from an attitude of forgiveness can the solid basis of hope for peace be built.

This proposal of peacebuilding is in itself a process of dialogue among the diverse religious traditions.  It is also a process of intra-community dialogue in which members seriously need conversion to accept, from the perspective of faith, the more genuine demands of the religious experience while overcoming other fundamentalist insinuations.  This is the authentic inter-religious dialogue from the same historical moments and realities of life that encourage actions of justice, human dignity, and progress among all the members of the community. The Healing and Reconciliation of the cultural/religious communities are a very integral part of this process of Peace-building.