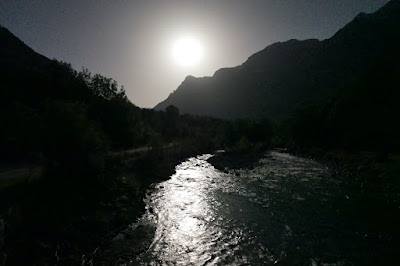 About moons, forests, mountains and fingers

About moons, forests, mountains, and fingers

When you visit the Pyrenees for the first time, you will pass the valley that unites-separates Spain and France. The valley is more or less 15 kilometers long. Along the way, on both sides of the river mountain, you will pass through forests of beech, cedar, and wild pine. When you reach the end of the valley you will see a seemingly impassable wall made of pure rock. From there, the road continues, crossing different levels of more than a thousand meters and inviting you to ascend to the peak to reach the top of the mountain, the Monte Perdido, Posets and Aneto mountains. From the top of these mountains, you can see not only a single valley of 15 kilometers long, but hundreds of them. Together, they form the biotopes called the Pyrenees. They say that we must be careful that a tree, no matter how huge it is;  the forest will make us wrong when describing reality.

We are now in the middle of an immense valley, with walls and a final curve to ascend thousands of meters. This valley, unfortunately, is nothing comparable to the Pyrenees valleys, called COVID-19.  In the last decades, we have traveled through valleys with different names: ozone hole in the poles, CO2 emissions, cyclones - each one with its name -, immense famines, endless droughts, wars, massacres, HIV epidemic; we could add many more names, don't you think so? We could consider each of these valleys to separate from the others, but that is not the case. They are all part of the same tapestry of human lives.

Since the Rio de Janeiro Earth Summit (1992), many urgent problems of humanity have been addressed. We can bring here the statements of the Millennium Development Goals that they wanted to put together, in a single document, the problems addressed at the summits held under the auspices of the United Nations. These are the MDGs 2000: 1. Eradicate extreme poverty and hunger; 2. Achieve universal primary education; 3. Promote gender equality and women empowerment; 4. Reduce child mortality; 5. Combat HIV/AIDS, malaria and other diseases; 6. Ensure environmental sustainability; 7. Foster a global partnership for development.

The MDGs 2000 did an important job of putting together the conclusions of the major UN forums, but more was needed. Much of what the MDGs intended was achieved, but they fell short in thinking that change consisted of making the "South" live what was lived in the "North". The terrible economic crisis of 2008 made it clear that the West, or the rich North, had to consider change as well, the whole world and all of humanity had to rethink things. Behind the title "The future we want", which the Rio+20 conference (2012) gave to its final document, there was a desire to go further. The approach of Agenda for Sustainable Development Goals 2030 represents a major change. There are two ideas as an axis: transforming our world and leaving no one behind. Something important has happened in the world since Rio 1992. The UN has put every human being at the center of its agenda of development goals: "LEAVE NO ONE BEHIND". But to make this possible, we cannot be left with just a valley or a group of trees: we have to assume the entire forest. We cannot climb the walls of a few valleys and think that everything is done, we have to think of climbing the whole mountain range.

We are climbing the immense walls of a valley called Coronavirus, COVID-19; it is not the first one we have climbed, but this one demands great effort. We can strive to reach the top and think that everything is done, but, soon, we will find another valley and other walls to climb. It is time to look as a whole; it is time to realize that we are one society that needs to change its strategy. We have to put human rights in the center and these, concretized in the 17 Objectives of Sustainable Development and its 169 goals. A forest? A mountain ranges? It is simply a plan for the future for our battered humanity. Fortunately, during this crisis, we have seen that many people are willing to give their lives to make a difference.

One night, with the sky covered with stars and a large full moon, a master and a disciple were talking. The master, raising his hand, invited the disciple to look at the great and clarifying spectacle of the moon. "Look," he said, pointing to the moon with his index finger. The disciple did not understand that the master did not want him to look at his finger but to the beautiful moon of the night. Much remained to be learned by the disciple. During this pandemic of the COVID-19, let us not remain looking at the finger; let us have the wisdom to raise our eyes towards the future and contemplate the moon. Let us not think that, by climbing the wall of a valley, we have done everything. Let us not think that, because we know well the immense tree of the COVID-19, we can remain calm. Let's look at the moon, let's look at the Agenda 2030, carried out between us.